Review: Is the Merlin Annual Pass Worth Buying for Theme Park Fans?

The chances are, if you’ve been to a top UK tourist attraction in the past few years, it’s operated by Merlin. The name may not be known by everyone, as Disney, Six Flags and even Tussauds (were) are, and that’s mainly because the Merlin Entertainments Group was founded just fourteen years ago in 1998. Since then, the company has expanded exponentially to operate over 70 attractions worldwide; making it the second largest such operator in the world, behind only Walt Disney Parks and Resorts.

With such a vast collection of attractions, us theme park junkies will be wondering if there are ways to cut down the ever increasing costs of visiting them. Is the heavily-promoted Merlin Annual Pass the best way to do this? Here’s a rundown of the all-year ticket, which offers entry to Alton Towers, Thorpe Park, LEGOLAND Windsor and Chessington World of Adventures, along with many other smaller attractions.

The first distinction to be noted is between the Merlin Annual Pass and each individual theme park’s Annual Pass. The Merlin version is an overall pass, allowing access to all attractions, whilst the individual passes allow access only to that specific park. Unless you have a particular love for a single park I can’t see much point in buying the specific option; it is a little cheaper, but if you were to visit any of the other Merlin attractions throughout the year as well, you’d probably be paying a lot more.

The Merlin Annual Pass covers 28 attractions in the UK, (overseas attractions are not included, however there is a 50% discount as a passholder) which includes Alton Towers, Thorpe Park, Chessington, LEGOLAND Windsor, The London Eye, Warwick Castle, the Blackpool Tower, The LEGOLAND Discovery Centre in Manchester, both Madame Tussauds (London and Blackpool), all of The Dungeons attractions and all of the Sea Life aquariums. As you can see, it’s a very hefty list and the range stretches right across the country. I’ll draw comparisons to other rival annual passes throughout, negative and positive, but there’s no doubt this list is by far the most impressive. 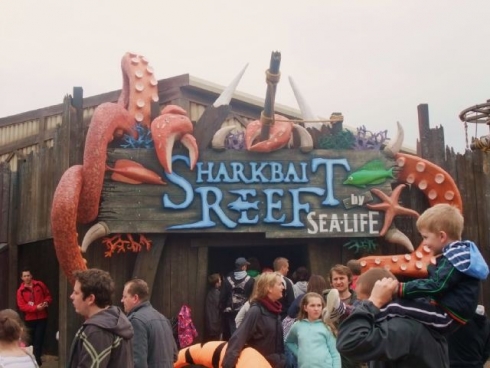 There are eleven Sea Life aquariums on offer, as well as Sharkbait Reef at Alton Towers.

If you’ve already decided to buy an Annual Pass, the biggest decision is whether you go for the Standard version, costing £156, or the Premium, costing £36 more at £192. Both passes cover all 28 attractions and they both have similar perks; in-park discounts ondining and merchandise, as well as special rates for the resort hotels. The major differences are the free parking and lack of "block-out dates" that come with the Premium Pass, meaning you can visit any time during the year without additional charge.

The parking cost is not too much of a concern; it costs £3-5 at most attractions, so you’d have to rack up a number of visits before it becomes more expensive than the Premium Pass. Obviously, this is also only the case if you drive to the attractions; if you were to use public transport no parking would be necessary anyway.

The calendar restrictions, however, are more of an issue. The first problem is for the Fright Nights Halloween events at Thorpe Park; these are a highlight of the theme park year, and a must visit for any enthusiast, and you’ll end up paying at least £5 more with the Standard Pass. This is the same for the Dungeons at Halloween; and they too are well worth a visit at that time of year.

Restrictions on the central London attractions are the tightest; the Standard pass doesn’t cover any of the four attractions (London Eye, Madame Tussaud’s, Sea Life Aquarium and the London Dungeon) during August and an additional fee would be required. The London Eye is also off-limits on Valentine’s Day, Halloween and the last five days of July.

The best approach when deciding which pass to buy is to make a rough plan of year to see when you plan to attend each attraction. My view is that if you travel by car, the Premium Pass is probably the way to go, as your parking is paid for. However, if you’re travelling mainly by public transport, it’s probably wiser to get the Standard Pass, unless you have specific plans to visit during the restricted days. One thing final thing to note is that you can upgrade your Standard Pass to a Premium Pass at any point in the year for a £35 flat rate.

If we imagine we have the Premium Pass, worth £156, and we are visiting Chessington, which is the cheapest of the theme parks, we would make our money back in just four visits in comparison to the gate price, and six visits in terms of the cheaper online price. Six times may seem excessive for one theme park, but considering you can spend multiple days at a time at the resort, with its new hotel, this is not too implausible, and of course, this is just one of the many, many attractions on offer.

The sums are more compelling for more expensive parks such as Alton Towers, but this doesn't factor in the frequent 2-for-1 vouchers that Merlin offers via retail outlets, newspapers and other sources (you can find all the latest deals in our Special Offer Watch section). These can change the maths significantly, and you should more-or-less always be able to get hold of vouchers if you plan in advance. Again, making a rough plan of how many times you expect to visit each park will enable you to check how the sums add up for you personally.

In comparison to other theme park operators' season passes, the Merlin Annual Pass is pretty pricey. In the US, Six Flags’ version costs just $5 more than a day ticket, although given the size of the country relative to the UK it is much less likely people will race cross-country to one of the chain's other parks. Even Disneyland Paris most expensive pass is cheaper, coming in at around £164, and it must be remembered that Disneyland Paris is operational for all twelve months of the year, unlike the seasonal UK parks. However; this covers just two theme parks. Overall, nominally the Merlin Pass may seem like quite a lot, but when taking into account the number of attractions on offer, it’s actually pretty good value.

We’re only a couple of months into the 2012 season, and it’s still worth considering getting yourself a Merlin Annual Pass. But when you’re thinking about it, it’s a good idea to plan ahead; make some dates and see just how many attractions you plan to visit. You don’t want to end up going to parks just for the sake of it - it can become overkill - but for the true enthusiasts, with so much on offer, it’s almost certainly well worth it.

I have had Merlin passes that work out a bit cheaper if you get a "family" deal....but what is little known is that you can get standard passes for everyone but just upgrade ONE pass to a Premium pass then that way parking is also sorted for the whole family but only need to upgrade ONE pass....and the shops & cafe's do a deal of 20% off....also get an annual pass drinks container (£16 each) but just get one then you can fill it up at any of the theme parks with a soft drink of your choice...considering that the drinks can cost almost £2 a time its worth it...
Great value...Lots of fun to be had and on top of the theme parks there's the Sea Life Centres & other attractions too.

It's worth keeping an eye out for half-price annual pass deals which Merlin have offered before in January - my boyfriend and I both purchased standard annual passes last year (2012) for about £80 in the sale, and they were more than worth it, especially as we both lived close to London so could take full advantage of attractions such as the eye and the dungeons, which we almost certainly wouldn't have paid to go to under normal circumstances. We also made an extra effort to get as many days in theme parks as possible - I think we racked up about 11 or 12 days during the year - and now am using this year to visit other parks (e.g. Oakwood, Blackpool etc)as we're well and truly 'Merlined-out'!

You even get 20% off booze! i reccomend buying it mid season, so you can fill your boots this year and then enjoy all the new attractions in the first part of next year.

I have bought a premium pass for the last 3years and it. Is worth it +you get 20%off shops cafe and bars