Image: Shanghai Disneyland castle to be Disney's most ambitious yet

Disney has released new concept artwork of Shanghai Disneyland's Enchanted Storybook Castle, which promises to be the company's most ambitious castle yet.

The enormous structure will sit at the heart of Shanghai Disneyland when it opens in late 2015, and is set to host a boat ride as well as a spectacular evening show. In front of the castle, an 11-acre green space featuring water elements, trees and costumed characters will replace the traditional Main Street, USA that appears at most of Disney's other "Magic Kingdom-style" parks.

Disney CEO Robert Iger revealed the new image during the company's Annual Meeting of Shareholders on March 6. It shows a portion of a 3D model of the park, with the focus being on Enchanted Storybook Castle: 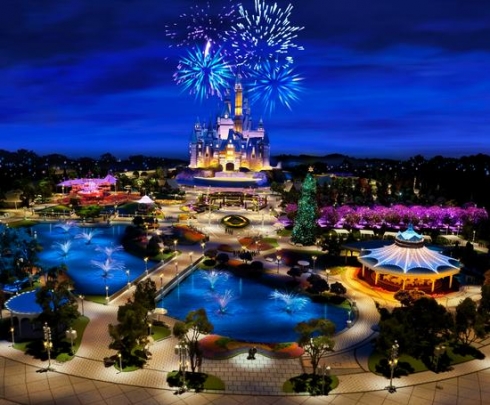 Describing the image, Tom Staggs, chairman of Walt Disney Parks and Resorts, said: "We are incredibly excited about the developments and progress of the Disney resort in Shanghai, one of the world’s most vibrant cities. Shanghai Disney Resort will bring a classic Disney Parks experience to mainland China and will immerse Chinese guests in a whole new world of creativity, imagination and adventure that only Disney can deliver."

Disney has already confirmed that Enchanted Storybook Castle will host a boat ride, while other concept artwork appears to hint that the castle will also be the setting for a nighttime show similar to Disney Dreams at Disneyland Paris.

As with its previous overseas resorts in Tokyo, Paris and Hong Kong, Disney has secured a local partner to help fund the Shanghai Disney Resort. It is set to be majority-owned by the Chinese government, which will take a 57% stake. The resort will be Disney's fourth outside of the US, after Disneyland Paris, Tokyo Disneyland and Hong Kong Disneyland.