Universal Orlando has begun accepting reservations for the under-construction Cabana Bay Beach Resort hotel, which will open by March 31, 2014.

Universal has revealed that the new hotel could actually open earlier, with no specific opening date having been provided. Currently, it is only possible to reserve family suites at the hotel from March 31, 2014, with the remainder of the hotel's rooms being available from July 1, 2014. Bookings can be made via the official Universal Orlando website.

Whereas Universal Orlando's three existing hotels are aimed primarily at the high-end of the market, the Cabana Bay Beach Resort is designed to be an affordable option for families. It will be themed around old-style "road trip" vacations, and will be managed on Universal's behalf by Loews Hotels & Resorts. 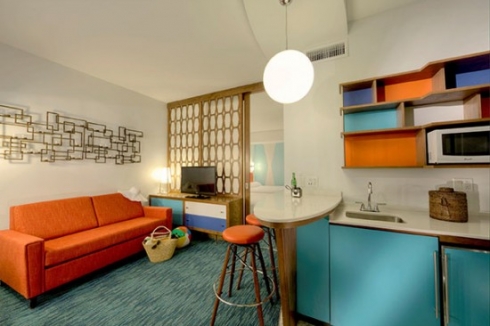 The fourth on-site hotel to open at Universal Orlando will be centered around two courtyards. The North Courtyard will open first, and will be themed around 1950s and 1960s motor courts. It will be surrounded by 600 family suites, each boasting a foam bed, a kitchenette, two televisions and a large bathroom. The suites will accommodate up to 6 guests.

The South Courtyard, meanwhile, will open later in 2014 and will be surrounded by 900 standard guest rooms and a further 300 suites. Each of the standard rooms will sleep four guests and contain two queen beds.

Guests at the new resort will not receive the same perks as those at the existing Portofino Bay Hotel, Royal Pacific Resort and Hard Rock Hotel. Most significantly, they will not be equipped with unlimited Universal Express passes, which enable guests at the other resorts to skip the lines for major attractions. However, they will be able to take advantage of early entry into Universal Studios Florida and Islands of Adventure - a particularly important perk for those visiting the Wizarding World of Harry Potter.

Located on a 37-acre site next to Islands of Adventure, the new resort will be squarely in the same category as Walt Disney World's recently-opened Art of Animation Resort, which aims to compete with nearby "value" resorts such as the Nickelodeon Suites Resort in Orlando. 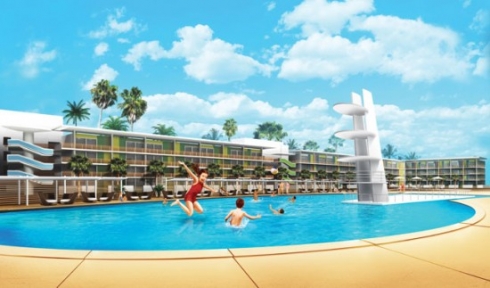 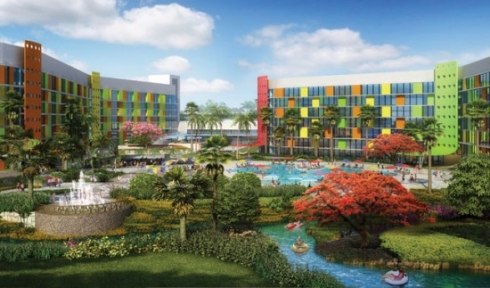 The construction of the new hotel marks the first time Universal Orlando has taken on Walt Disney World in the family accommodation market, as it aims to claim a greater share of the time that families spend on vacation in Orlando. It will be heavily-themed, with 50s-style rooms, lobby area, a pool and a lazy river.