A consortium linked with Hollywood movie studio Paramount Pictures has announced plans to build a major new theme park resort in the Thames Estuary near London.

The group, which is known as London Resort Company Holdings (LRCH), plans to spend £2 billion to convert the 872-acre site of a former cement works into a theme park and related facilities. This would include a water park, an entertainment district, music venues and hotels. The backers of the project include UK firm Development Securities, France's Lafarge and Canadian construction company Brookfield Multiplex.

Significant barriers remain to making the Paramount park a reality, with securing funding and planning consent likely to prove the biggest challenges. LHRC claims that the park could open by 2018 if the project runs smoothly. 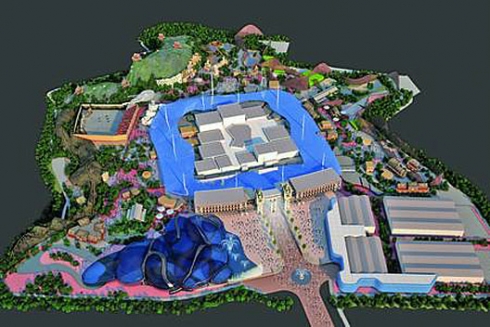 The plans show an entertainment district in the centre, along with the theme park and an indoor water park.

An agreement has already been reached with Paramount Pictures to license the studio's movie properties for use in rides and attractions at the theme park. The studio has reached a similar deal for a new theme park in Murcia, Spain, signalling its intent to return to an industry it has previously abandoned. Progress on the Murcia park has been slow, however.

Unlike Paramount Parks, the studio's previous theme park venture (which was sold to Cedar Fair in 2006), the new park is set to be owned and operated entirely by outside investors. As with the Spanish park, Paramount Pictures' involvement is likely be limited to licensing intellectual properties for use in attractions, and to providing conceptual masterplanning and design for the project.

Visitors from London and the rest of the UK would be able to reach the theme park via the Ebbsfleet International rail station, which serves the Eurostar link to France. This would effectively place the Paramount park in direct competition with the Disneyland Resort Paris, which is easily reached via the same rail route.

omg! this is what britain needs. we have seen the resorts in paris,orlando and tokyo,but they never planned to build one in britain! we loooooove theme parks,and we might be the only ones with a paramount themed park (excluding mercia,spain)plus, we would most probaly fix our economy. its all good!