Cedar Point has released a picture of the first inhabitant of its upcoming Dinosaurs Alive! on Adventure Island attraction, which will open in summer 2012.

The park released the image via its official Twitter account, describing the dinosaur as "'Pachy' the traveling Pachycephalosaurus". It will form part of the animatronic dinosaur exhibit, which will cover four acres on the wooded island that is located in the lagoons at the rear of Cedar Point.

The park is investing $1 million in the new addition, which it will aim to recoup by charging guests an additional $5 each to experience Dinosaurs Alive! on Adventure Island. 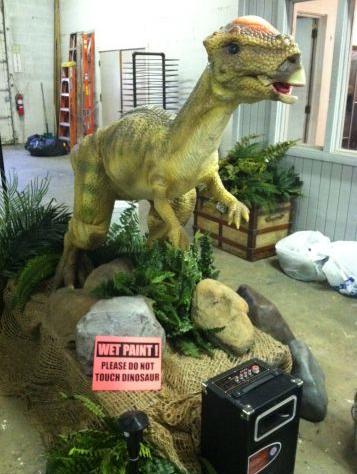 Dinosaurs Alive! on Adventure Island will feature around 50 life-size animatronic dinosaurs, each designed by Canadian firm Dinosaurs Unearthed. Four of the models will be controllable by guests via interactive consoles, which will show how scientists believe they moved their arms, tail, mouth and eyes. The largest model on show will be the Ruyangosaurus, which will reach a height of almost 40 feet and a length of 72 feet.