Slammer still out of action at Thorpe Park

The Slammer attraction at Thorpe Park remains out of action, with some visitors reporting that the ride has been partially dismantled.

Slammer, an S&S Sky Swat ride, has been out of action throughout September and extensive repair work was still being carried out during the last week. The cause of the downtime is unknown, although the extended duration could indicate that the ride requires a new part.

One of only two Sky Swat rides to have been built (the other being Catapult at Six Flags New England), Slammer has suffered from frequent downtime since its delayed opening in 2005. It sees guests seated at either of a large arm, which is carried to the top of a tower. The arm then spins round in a circular motion, tipping guests up and down and resembling a large "fly swat". 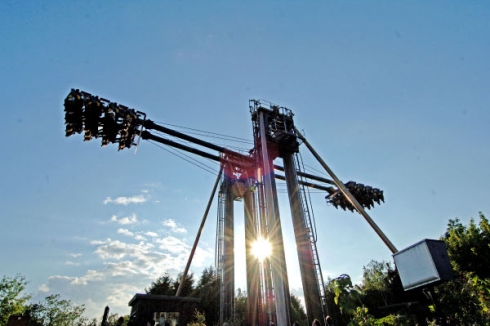 Slammer sees guests seated at either end of a giant "swat".Image © Thorpe Park

Thorpe Park will hope to have Slammer operational in time for its annual Halloween Fright Nights events, which kick off on October 9. Further details of Fright Nights can be found in Theme Park Tourist's preview of Halloween 2010 at the world's most popular theme parks.

I visited Thorpe today chatting to staff at the park the ride apparently has a fracture in the metal structure I believe this is in 1 of the main support columns, reason why it's been so delayed is that the company that made it has gone bust and they are trying to find someone that can manufacture the one off part? Looked over the fence today the ride likes intact at the minute apparently only been live for 2 weeks of the season?