Hogwarts Express At Islands of Adventure

Linking the Wizarding World of Harry Potter - Hogsmeade at Islands of Adventure with Wizarding World of Harry Potter - Diagon Alley at Universal Studios Florida, the Hogwarts Express recreates the journey taken by Potter and his friends at the start and finish of every year at Hogwarts. It actually travels through a backstage area between the two parks, but multimedia technology is used to convince guests that they are journeying between London and Hogsmeade.

Initially, Universal envisaged the attraction as little more than a basic transportation link. But it quickly became clear that many fans were more excited about the Hogwarts Express than they were about the rest of Diagon Alley. Instead, the Hogwarts Express became a full multi-sensory experience, telling a story as well as getting guests from A to B.

Linking two lands with a shared theme in two entirely separate theme parks, the Hogwarts Express is a truly unique attraction. In fact, it's the only ride listed in our extensive database of 3,500 attractions that is listed as belonging to two parks!

The trains that will run on the Hogwarts Express line are faithful recreations of those seen in the movies. There are two trains, so that the ride can run in both directions (from Hogsmeade to Diagon Alley, and vice-versa) simultaneously. Each train consists of a locomotive, a coal car and three passengers cars, and can hold 200 passengers. The trains billow steam, and the whistle sounds exactly the same as the one in the movie. The interior of the trains is pulled straight from the silver screen, with the dimensions of the cabins and hallways matching those of the movie sets.

Most theme park rides are over in two or three minutes. Not so with the Hogwarts Express, which lasts for a full seven minutes. There are two completely different journeys - one from Hogsmeade to Diagon Alley, and one in the opposite direction. Each features a different storyline and characters.

Riders on the Hogwarts Express are required to hold a Park-to-Park ticket, covering admission to Universal Studios Florida and Islands of Adventure. To cater for those who have purchased single-park tickets that wish to ride, Universal has set up ticket booths at the two stations. 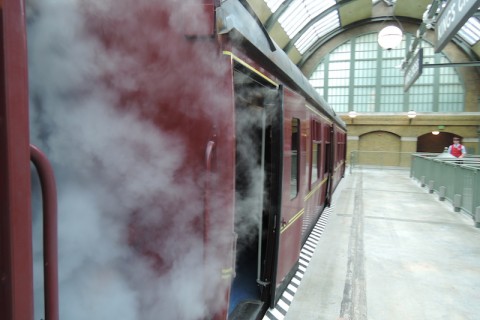 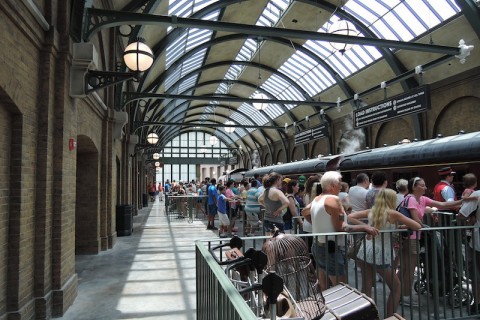 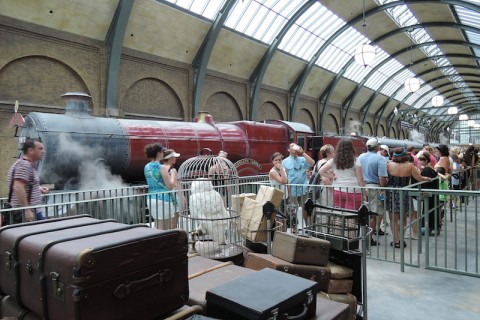 See all photos of Hogwarts Express

Sorry, there are currently no reviews for Hogwarts Express .