Tower of Terror At Tokyo DisneySea

While it offers a ride experience that is similar to the Twilight Zone Tower of Terror attractions at Disney's Hollywood Studios, Disney California Adventure and Disneyland Paris, Tokyo DisneySea's version dispenses with the Twilight Zone tie-in.

The elaborate backstory revolves around Harrison Hightower, a famous adventurer who has collected a variety of artefacts inside a New York hotel. After bring back a cursed idol from Africa, he boards an elevator with it - which promptly crashes to ground below. When the doors are opened, Hightower is nowhere to be seen.

Guests are taken on a tour of the hotel, with a guide and an effects-laden pre-show filling them in on the background. They then emerge into a storage area, where they are divided into groups and board one of the hotel's elevators. Seated and strapped in, they rise to take in two mid-level effects scenes. The elevator then races to the top of the hotel, offering a quick peek out over the park before plummeting towards the ground below at speeds that are faster than freefall. The elevator then rises and drops again several times, before guests emerge into the post-ride shop.

The Tokyo DisneySea version of the Tower of Terror is a clone of the version at Disney California Adventure (apart from the storyline). The original ride, which opened at Disney’s Hollywood Studios in Florida in 1994, features an additional section in which the elevators leave the shaft and enter one of the hotel’s floors, but this was removed to increase the reliability and capacity of subsequent versions.

Photos of Tower of Terror 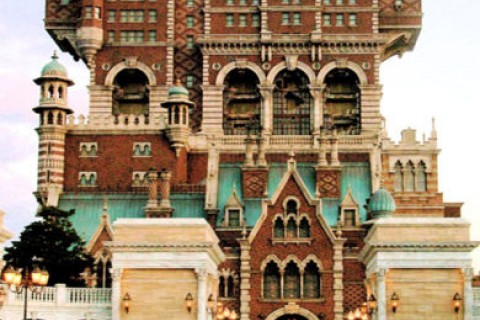 See all photos of Tower of Terror

Reviews of Tower of Terror

Submitted by Anonymous on Saturday, November 4, 2017.

Now, I love DHS's Tower of Terror, but Disneysea's simply tops it. The queue and preshow are far superior (this has a preshow that itself would be worth a 30 minute wait). The ride itself isn't as thrilling as the Floridian ride, likely not as good as a ride either. It's similar to the DCA version, my least favorite version. However, with Tower of Terror, the ride is more about everything before the drop sequence really. The buildup, theming, and story here are better than the Florida ride. It's my favorite Tower of Terror.

Submitted by Anonymous (not verified) on Monday, December 5, 2016.

The ride itself is pretty similar to the US versions. What really stood out to me here was the story and the decor. The outside of Mystic Manor was really stunning especially at night, and the queue inside was also very immersive. What I enjoyed most, though, was the story: essentially, from what I could gather (the pre-shows are in Japanese), this really rich New Yorker goes around the world stealing artifacts, much to the anger of those cultures. Eventually he steals a cursed artifact and it bites him in the butt (I don't want to say more, as it could ruin some of the pre-shows).

Some might say the ride is similar enough to give this a miss while in Tokyo, but I loved it and really got in to the non-Twilight Zone story, and rode it multiple times.