Opened at SeaWorld San Diego in May 2012, Manta combines a traditional roller coaster with with elements of a water ride. While it features a similar theme to the Manta coaster at sister park SeaWorld Orlando, it offers an entirely different ride experience. Whereas the Florida park's original uses a "flying" coaster system to simulate the gliding action of manta rays, the SeaWorld San Diego version utilises a launch system and incorporates giant screens showing images of rays other marine creatures.

Designed to recreate the experience of gliding through the ocean like a manta ray, Manta is a Mack Launch Coaster, similar to the dark ride-coaster hybrid Blue Fire at Germany's Europa Park. To overcome a stringent 30-foot height limit set by the California Coastal Commission, its tallest drop stands at just 54-feet-tall and it instead uses the launch system to generate speed. The park excavated 24-feet downwards in order to enable the drop to exceed the height limit.

As on SeaWorld Orlando's Manta, the ride's trains are themed to resemble manta rays. Each holds 20 people, seated two across. It packs two launch sections along with more than a dozen twists and turns, into its 2,825-foot circuit.

Manta's first launch is combined with a 270-degree screen which uses a cutting-edge projection system to immerse riders in the underwater world of the rays. Although riders do not actually get wet, the coaster also passes over a water feature with effects being used to simulate "spraying" water.

Alongside the roller coaster, a revamped marine exhibit enables guests to view the creatures that inspired the ride up-close. This is an overhaul of the former Forbidden Reef exhibit, and is home to more than 65 bat rays, 10 guitar fish and more than 400 other sea-dwellers.

The existing underwater viewing area was upgraded with brighter lighting and acrylic windowsto offer an underwater viewpoint of the bat rays. Themed to appear as though underneath a pier, the area also incorporates interactive educational elements such as touch-screen information booths, video monitors and life-size models of rays. 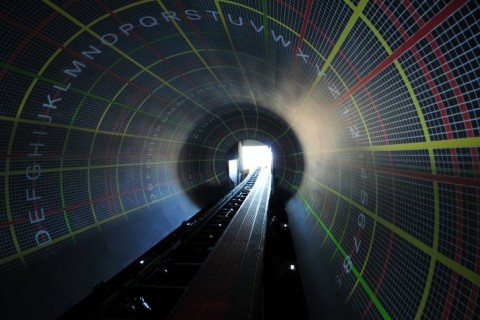 See all photos of Manta

Sorry, there are currently no reviews for Manta .