The Beast At Kings Island

The Beast is a wooden terrain roller coaster built by the maintenance staff of Kings Island amusement park. The Beast is notable for its terrain-hugging layout, with only its two lift hills visible from within the park. Built in 1979, the Beast is still the longest wooden roller coaster on Earth at 7359 feet long with a 4:50 ride time.

The Beast is located in the Rivertown section of the park with an abandoned mill as its station. The ride takes place entirely in the woods, secluded from view, and passes through three tunnels. It's finale is a 540 degree helix that is partially enclosed. These elements have lead to it being a fan favorite at night, with no lighting in the woods or tunnels leading to an extraordinarily chaotic experience.

Photos of The Beast 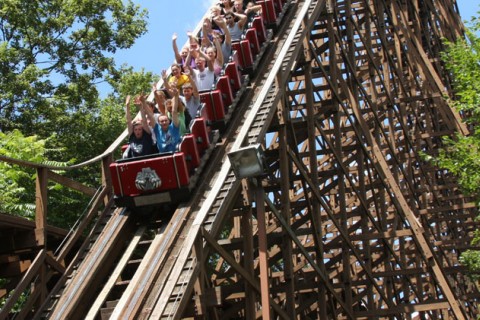 See all photos of The Beast

Reviews of The Beast

Submitted by Anonymous (not verified) on Saturday, September 30, 2017.

I love wooden coasters, but this one is just too rough. Were they trying to make me visit a chiropractor? I rode all of the coasters here and this was the "roughest." It took all the fun out of it.

Submitted by Anonymous (not verified) on Monday, September 23, 2013.

This is a classic terrain coaster and I can see how those who are not fans can ride and think "that's it?"

During the day the ride could almost be considered boring. You go down a fun hill, then over another smaller one; and then you pretty much cruise through the woods in a straight line (with trims), with a couple (not surprising) turns until you hit the second lift, and then it's some circle.

It's after dark when this coaster has a life of its own. The mist in the woods and the almost complete darkness (unless you're lucky enough to have moonlight), hides what is in store. Even if you think you know the coaster during the day; at night you're not going to know what to expect or what will be thrown at you. And the grand finale is what will stick in your head as you leave the ride.

Do not judge the coaster by a single daytime ride. You have not experienced The Beast until you're ridden it at night.

Submitted by Anonymous (not verified) on Thursday, September 19, 2013.

This is a great terrain hugging wooden coaster. Like most wooden coasters, the ride does change with the weather. The ride experience can also vary based upon the seat occupied for the ride (some are rougher than others). I've been riding this coaster since its first season and still enjoy it!

The best coaster ever at night! Two completely different rides if ridden in the day versus riding at night. This makes for a very fun and rideable coaster several times a day because of the difference of night and day.