Backlot Stunt Coaster is a family LIM-launched roller coaster built by Premier Rides for the 2005 season. It is the first of three clones built at Paramount's Kings Island, Canada's Wonderland, and Kings Dominion respectively. All three were originally themed to the 2003 film, "The Italian Job," with Kings Island's called "The Italian Job: Stunt Track."

The ride opened as one of the first ever launched roller coasters aimed at families and also showcased revolutionary special effects. The ride featured on-ride audio (a technology usually reserved for Disney and Universal Parks), and its trains were 3/4 scale replicates of BMW's MINI Cooper, the cars featured prominently in the finale of the 2003 film.

The ride begins with a 40 mile per hour launch into a triple upward helix built into a "parking garage" shell (as it is meant to duplicate the up-and-around motion of a car ascending a parking deck). The trains then swerve between police cars whose sirens blare, pass through an overbanked turn, and down a staircase before coming to a stop at an industrial complex scene. There, a helicopter rises, "firing" at the trains and cracking pipes of gasoline which spray on riders.

A second round of gunfire ignites the streams of petrol and cause two plumes of flames before a gas tank explodes. As the explosion flares, the train launches a second time into a pitch-black tunnel (meant to duplicate the movie's sewer chase), then hits a third "booster" launch as it rockets out of a smashed billboard with the ride's name. Until 2007, the cars came out of the billboard and triggered a fountain-driven "splashdown" in an aqueduct at the foot of the billboard.

While Kings Dominion's and Canada's Wonderland's versions of the ride have degraded thematically (with the former's not even stopping at the helicopter scene with no sound, water, or fire), Kings Island's was updated in 2011 with new LED lights on the helicopter's gun barrels, new queue music, and the dramatic "Ride of the Valkyries" playing while the helicopter fires. 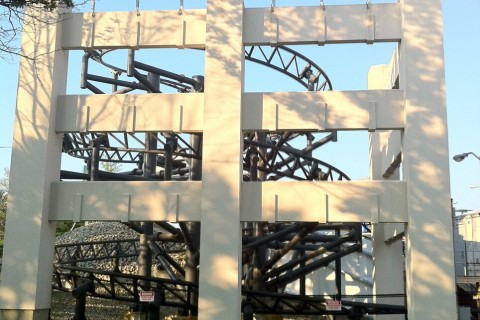 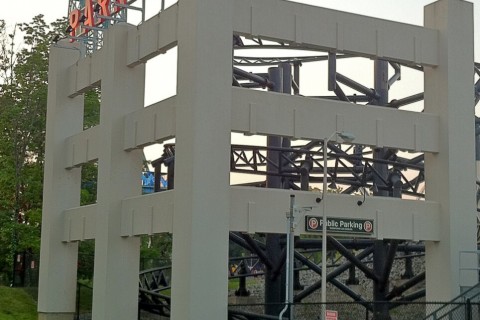 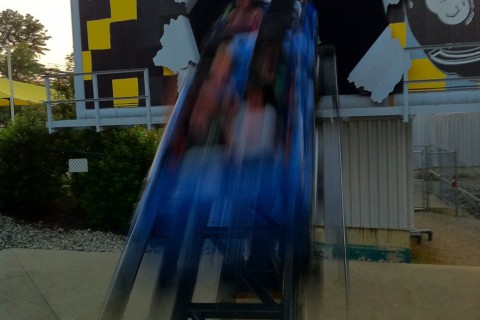 Sorry, there are currently no reviews for Backlot Stunt Coaster .