Step right into a living board game and watch as your favorite midway games (break the plate, land the ring on the bottle, etc) come to life in a stunning 4-D interactive shooting game, complete with your favorite characters. 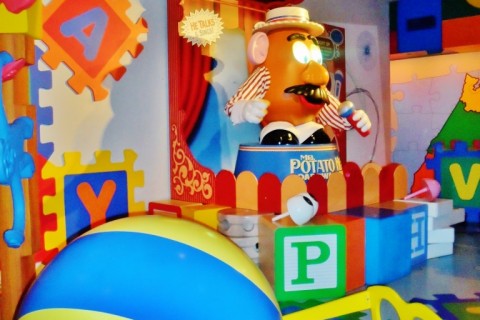 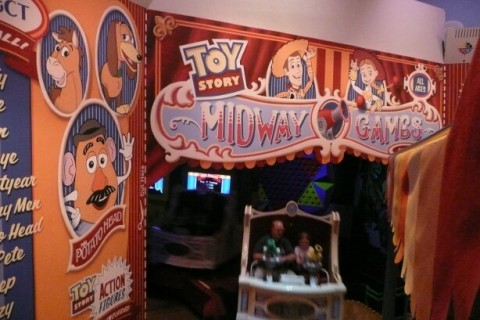 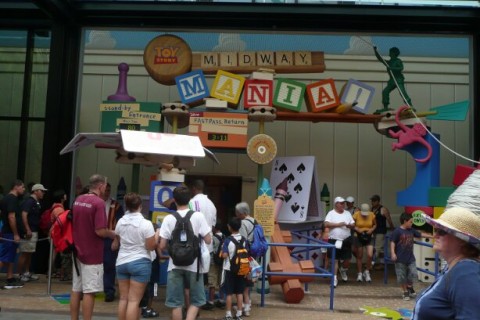 This is my favorite attraction in any Disney park. It is infinitely repeatable--at least until you've played so many times you feel like your arm is going to fall of! The motion of the ride vehicle is fun but not overwhelming and the stops to play the games give any motion sickness sufferers a minute to regroup after each scene change, so almost literally everyone can ride it. The game play is (usually) super accurate and there are so many easter eggs and hidden secrets that it never gets old. Your score improves when you work cooperatively with your ride buddy, so it's got a great lesson. The theming is completely immersive. If the ride, itself, isn't enough to make you fall in love, watch the process for converting the disability access vehicle. It's amazing how this vehicle was crafted as a convertible way for everyone to ride. This ride is simply fabulous!

Toy Story Midway Mania fixed all the potential problems with Buzz Lightyear Space Ranger Spin or Men In Black: Alien Attack. No matter how good you think you are at the attraction's games, there's always a chance you could lose. The 3D is also pretty easy on the eyes and the queue is impressively immersive.

Step Right Up, Everybody.....and Have a Blast!

Submitted by Anonymous on Wednesday, October 16, 2013.

Step right up, everybody! Have yourself the plate-bustin, alien-ringin, balloon-poppingest fun time of your life on Toy Story Midway Mania!

Full of the delightful characters of the Disney-Pixar computer-animated Toy Story films (Buzz, Woody, Rexy, Mr. & Mrs. Potatohead, Slinky, etc), this spinning, 3D carnival attraction is great fun for the young or just young at heart. Have a blast as you spin wildly from scene to scene, using your little pull-string cannons mounted on your car to rack up your score on a variety of fun games and see if you can beat your partner or beat your own score.

After the initial test period where you can figure out how and where to shoot, it's off to the races as you break plates, toss pies, throw darts, pop balloons, use aliens as ring toss objects, and aim and shoot all over your 3D screen in your attempt to score as high as possible. Be on the lookout for higher value targets sometimes spread further away and high or low. If you hit certain targets, a special little surprise awaits you.

Because the ride is so fun and so very popular with the little kiddies your best bet to getting on the ride is (1) get to the Hollywood Studios park at park opening time and speedwalk to it for a short wait in line or (2) do #1 AND then get yourself a fastpass so you can ride a second time. Otherwise, you can be sure of a super long wait even today, several years after the attraction first opened.

The ride itself is a lot of fun as is the entire ride queue experience. As you walk and wind your way through, just look around you at the larger-than-life scale replicas of your favorite childhood games and game pieces. AND, take special note of the incredibly realistic Mr. Potatohead animatronic which can talk, tell jokes, speak right to you, AND even remove his own parts!

Another interesting aspect of Toy Story Midway Mania is....that despite the above average waits, it also has an above average ride time, coming in at about 5 minutes. I guess Disney decided they'd save themselves some grief from unhappy customers who'd certainly speak out if it was only a 1-2 minute long ride.

Although Disney World already had a Toy Story-based shooting game over at the Magic Kingdom ("Buzz Lightyear's Space Ranger Spin"), this one is more advanced in its technology and allows you to score higher.

Check out Toy Story Midway Mania....but if you do, remember to go EARLY!

Submitted by SparklinDiamond on Tuesday, September 17, 2013.

Can't really fault this ride, apart from the fact that it is over far too quickly. But that's not a bad thing, it just means you better be prepared to queue up for it all over again!
I waited 2 hours for this ride with my best friend last December and was so excited to finally go on it! I will admit that we got a little sick of the animatronic Mr Potato Head's spiel after an hour and a half but it was quite amusing to say the least to hear him singing "one potato, two potato.." And the animatronic itself was very cool, really well made, as he even takes out pieces of his own body.
Once we got onto the ride me and my friend grabbed onto our little shooter things and as we started spinning around corners and seeing we'd been shrunk to the size of a toy, we realised how fun it was going to be. The effects are hilarious we kept laughing the whole way through. I burst a balloon on the 3d screen and we felt it blow in our face. So clever! We only got to go on it once unfortunately as the queue was so big (and even though I came last in our vehicle, I still wanted to go again and better myself!) I cannot wait to go on again this November!

Be prepared to wait, but it is worth it!

As far as ride experiences go, Toy Story Mania is hard to beat! However, be prepared to wait an hour and a half or more to experience it.

Get ready to travel through different scenes led by all of the Toy Story gang! Anyone that has a bit of a competitive bone in their body will definitely enjoy this ride. Interactive 3D shooting galleries that blow air, spray water and have hidden gems that exist within the scenes gives you a workout and a lot of fun at the same time!