Formerly known as Space Mountain, the ride was given a Star Wars theme when it re-opened in May 2017. The story of the ride is now based on a battle with the "dark side's" Tie Fighters.
When Disneyland Paris opened in 1992, a large space was reserved in Discoveryland for a major future attraction. It was a poorly-guarded secret that this spot would eventually house the park’s own version of the classic Space Mountain roller coaster at Disneyland and the Magic Kingdom – but few could have predicted how different an experience the Paris version would offer.

Rather than being a clone of the existing Space Mountains, Space Mountain: De la Terre à la Lune (as it was known when it opened in 1995) completely reinvented the concept. While it retained the indoor, pitch-black setting, the “wild mouse”-style ride system was jettisoned in favour of a high-speed, multi-inversion steel coaster designed by Vekoma.

The “journey into space” storyline was also cleverly re-worked, with the ride’s plot being based on Jules Verne’s classic 1865 novel De la Terre à la Lune (“From the Earth, to the Moon”). Victorian-era theming elements set the scene, while the ride started with a stunning launch sequence that was designed to represent a huge gun (the “Columbiad Cannon”) firing a rocket into space.

Most riders would be hard-pressed to recall the rest of the storyline, which saw the train coming close to being swallowed by the “Bluemoon Mining Machine” and experiencing a near-collision with an asteroid. They will, though, remember the spiralling journey through a series of inversions and hills, none of which could be seen in advance thanks to the darkened building.

In 2005, Disneyland Paris closed the attraction for a major refurbishment. When it reopened, many of the Victorian theming elements had been removed, and a new plot based around being blasted to the edge of the universe had replaced the Jules Verne storyline. The ride itself remained largely unchanged, although the launch sequence now takes place at the bottom of the cannon rather than at the top.
As part of the Disneyland Paris 25 years celebrations the ride is being updates and will be relaunched in Spring/Summer 2017 as Star Wars Hyperspace Mountain. 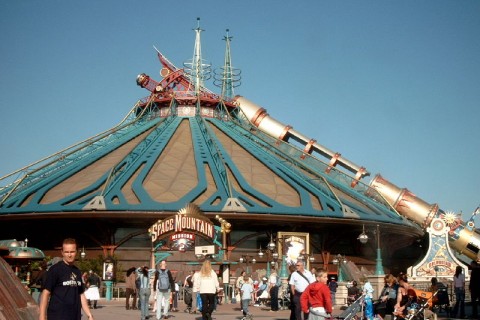 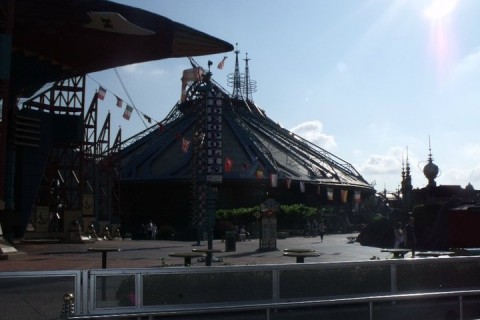 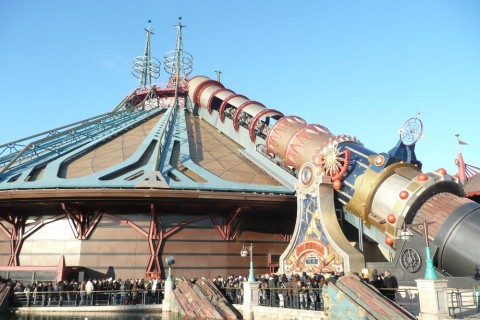 This ride does not operate by gravity but by propulsion like WDW's Rockin' Roller Coaster. You blast off, go through a loop (if I remember correctly) and tour the universe. Smoother ride and more exciting.