Pirates of the Caribbean At Disneyland Paris

Located right at the back of Adventureland, Pirates of the Caribbean is closely based on the original dark ride of the same name at California’s Disneyland. After a long, winding queue through the dungeons of a “fortress”, riders board boats and head off on a lengthy 15-minute adventure.

The opening section of the ride sees guests floating past the Blue Lagoon restaurant, which features a tranquil night-time setting. They are then carried to the top of a large lift hill, which is cleverly themed as a cargo lift. After passing some wretched pirates locked in jail cells, they then plunge down the first of the Pirates of the Caribbean’s two drops. Most riders will stay dry, but some water can make it over the sides of the boats following the splash-down.

The bulk of the ride sees the boats floating past various scenes of carnage in which audio-animatronic pirates fight the forces housed in the fortress and pillage the attached town. Finally, they head down the second drop into the eerie final section, which is home to a variety of doomed, skeletal pirates.

While the bulk of dialogue is delivered in French, this does not really affect riders’ ability to understand the scenes or the attraction’s underlying plot. Several of the songs are delivered in English, unchanged from the original Disneyland versions. Also unchanged are the pirates themselves – the Disneyland Paris version of the ride is the only one remaining that has not yet been updated to add characters from the Pirates of the Caribbean movies.

Photos of Pirates of the Caribbean 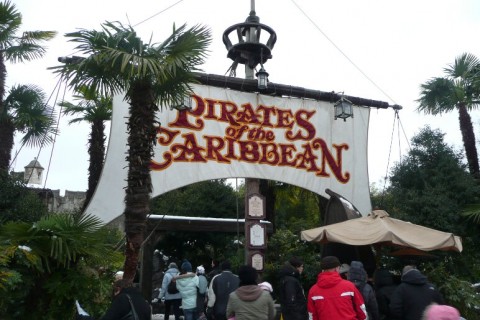 See all photos of Pirates of the Caribbean

Reviews of Pirates of the Caribbean

Sorry, there are currently no reviews for Pirates of the Caribbean .