One of the most recognisable attractions at every Magic Kingdom-style Disney theme park, Dumbo the Flying Elephant is based on the classic Disney animated movie “Dumbo”. The Disneyland Paris version of the ride is closely based on the Disneyland original, which has drawn large crowds since its 1955 debut.

Very similar to the Orbitron attraction in Discoveryland, Dumbo the Flying Elephant sees guest boarding one of 16 elephant vehicles. These rotate around a central column, with guests able to make them “fly” by using a lever that controls their height. Timothy Q. Mouse conducts the ride from the top of its central tower.

The ride sits in the centre of a water feature, and features circus-style theming. Up to 2 people can be accommodated by each elephant, with the ride hitting a maximum height of 7 metres and a minimum of 1.5 metres.

Two sets of elephants were constructed for Disneyland Paris’ Dumbo attraction. The first set had to be redirected to Disneyland in California after an incident in which a support bracket broke.

Photos of Dumbo the Flying Elephant 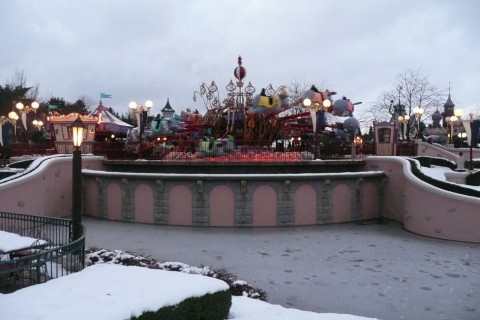 See all photos of Dumbo the Flying Elephant

Reviews of Dumbo the Flying Elephant

Sorry, there are currently no reviews for Dumbo the Flying Elephant .