The Frontierland area is dominated by Big Thunder Mountain, which sits on an island in the centre of the Rivers of the Far West. While similar in style to the big thunder mountain attractions at Disneyland and the Magic Kingdom, the Disneyland Paris version has several unique features – include its water-bound location.

The ride’s backstory is based around the gold-rush town of Thunder Mesa, which has long since been abandoned by most prospectors and miners. The extensively-themed queue leads to an indoor station, which contains two separate boarding areas (one for guests in the standby line, and one for FASTPASS holders).

Riders board a “mine train”, and are immediately plunged into darkness as they race at high speed through a tunnel under the Rivers of the Far West. They are then carried to the top of the first of three lift hills, which is housed in a tunnel. At the top, the train bursts out into the open at the top of Big Thunder Mountain itself, racing around a series of twists and turns. A second, outdoor lift hill follows, giving guests the chance to admire the scenery (and some animatronic animals that are located close to the track).

After another short race around the mountain, the trains start up the final lift hill. This is also housed in a tunnel, in which a disastrous collapse is about to occur. Fortunately, the train emerges in the nick of time, soaring through several more turns before plunging back into the final tunnel and emerging next to the station. 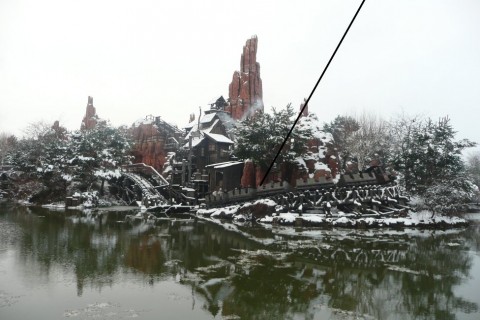 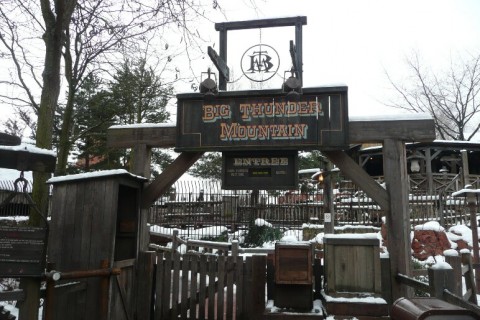 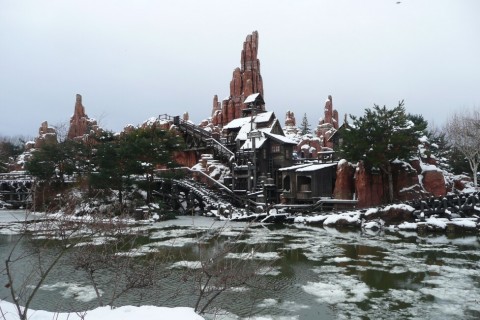 This is the largest and longest version of GTM anywhere. You board by a lake but the ride is located on an island with access and exit through tunnels. Better curves and drops, more scenery.

This is by far the best of the Big Thunder Mountain rides. The return journey though the tunnel back to station is an amazing end to this coaster. If you get the chance ride at the back of the train at night for the best experience.