A wooden roller coaster manufactured by Great Coasters International, Gold Striker will stand at 108 foot tall and will hit a top speed of 53.7 miles per hour at the base of its 103-foot first drop. The ride's 3,197-foot circuit will feature a series of banked turns and "airtime" hills, with the design being based on plans that were originally put forward several years ago before being dropped. 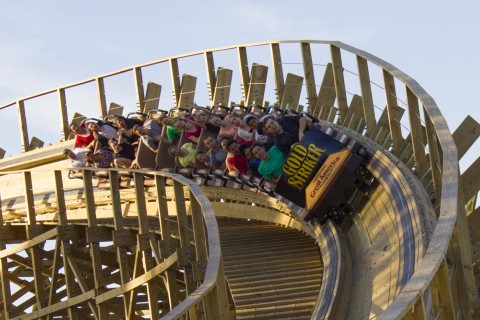 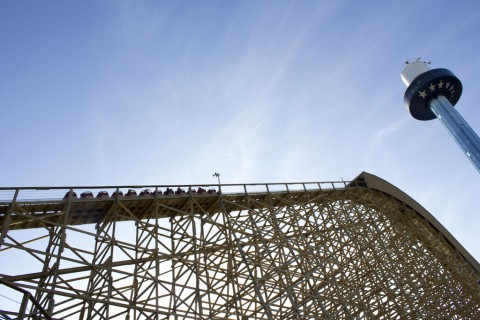 See all photos of Gold Striker

Gold Striker is CGA's newest attraction, and their first major coaster to be built since Psycho Mouse. Many initially shunned Gold Striker off as Great America already has another wooden roller coaster in the back of the park...that is, Grizzly. Grizzly however has been ranked as "Worst Wooden Coaster in the World" for 15 years straight. It still ranks low today.

Gold Striker is the complete opposite and maintains speed throughout the entire course. While Gold Striker looks like it focuses on steep banks and sharp twists, riders actually experience up to 14 moments of "airtime," that moment coaster lovers crave...where your butt leaves the seat for a few seconds. Gold Striker continues to be a huge hit as it has the longest lines in the park.

Riding recommendations: Try to arrive at the park early and make it your first ride. After the initial rush, the line will be consistently long as within the first 2-3 hours, guests are constantly entering the park. After that the lines taper off a bit. Sundays are also the best days to go for lighter crowds and shorter lines. In the end, I've ridden Gold Striker over 100 times and it only gets better!