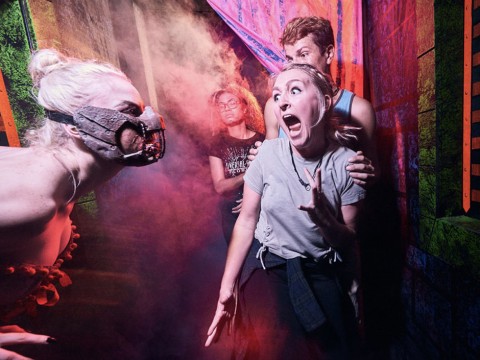 Halloween Horror Nights is Universal’s incredibly popular annual event that sees horror fans from across the globe swarm upon Universal Studios to immerse themselves in world-class theming and horrifying haunts. While horror may, naturally, be the focus of Halloween Horror Nights, there is something on offer for everyone, meaning that even those who are looking to have a slightly less fright-filled night at the park can still enjoy themselves.

So, if you’re curious as to whether this event could be for you and are wondering what other terrifying treats await you as you enter the park’s eerily lit front gates, look no further! Here are four reasons why Universal’s Halloween Horror Nights is about way more than just the scares…

Halloween Horror Nights sees some of Universal Studios’ rides continue to run throughout the night, however, for many of the event’s visitors, the rides are not the priority. The good news is: this means that many attractions boast ridiculously short wait times as guests immerse themselves in the horrors that fill the park. Walk on to fan-favorite attractions such as The Mummy or Rip Ride Rockit. Plus, be sure to take a wander around Diagon Alley, which remains completely untouched by the terrors of Halloween Horror Nights and also offers the perfect photo op in an empty Wizarding World, before you head to ride Escape from Gringotts with a considerably shorter wait than usual.

2. Sample a variety of horror-inspired food and drink!

Aside from their mind-blowing haunted houses, Halloween Horror Nights is known for one thing - Pizza Fries. This theme park staple has become one of Halloween Horror Nights cult food items that returns each year, alongside the much-loved twisted tater. Aside from these returning favorites, however, each Halloween Horror Nights event brings a new variety of uniquely themed food and drink items, inspired by the scares that guests can experience throughout their night. Last year saw a creepy Leatherface Cherry Pie hit the menu, which mimicked the look of the terrifying Texas Chainsaw murderer, while 2018 brought a waffle stack inspired by Eleven’s favorite snack from Stranger Things.

3. Immerse yourself in the event's mind-blowing live entertainment

Another staple for Halloween Horror Nights is their selection of incredible live entertainment. Last year audiences were introduced to the horrors of Halloween Nightmare Fuel, a flame-filled stage show, located in Universal’s old Fear Factor stage, which combined a whole host of mind-blowing elements including pyrotechnics and aerial stunts. Across the way, guests watched in amazement as Universal’s Halloween Marathon of Mayhem transformed the lagoon into a spectacle of color and light, as a variety of water effects displayed various clips and scenes from the properties present at the year’s event. 2022’s event is confirmed to feature two live shows, with many expecting to see both Halloween Nightmare Fuel and Marathon of Mayhem return, although details are yet to be confirmed.

4. Admire the incredible theming and feel as though you're living in a horror movie...

If you’re looking for just a small taste of the scares but don’t want the full-on experience of entering a house, scare zones allow you to dip your toe into the frights and they are certainly not to be missed! Most of the focus on Halloween Horror Nights is on the thrill-factor, but what often goes unnoticed is the incredible design that goes into each and every inch of the event. Universal spare absolutely no expense when it comes to the intricate theming that is implemented to bring these unimaginable horrors to life so you can truly spend hours admiring the detail that has gone into each scare zone. Plus, while you may not necessarily want to get up close with any of the creepy creatures that roam the streets of Universal Studios, the performers’ stunning costuming, alongside their eerily-realistic makeup, are certainly a sight to behold.

Besides the scares, what do you love most about Halloween Horror Nights? Will you be attending this years event? Let us know by leaving us a comment below or on our Facebook page.