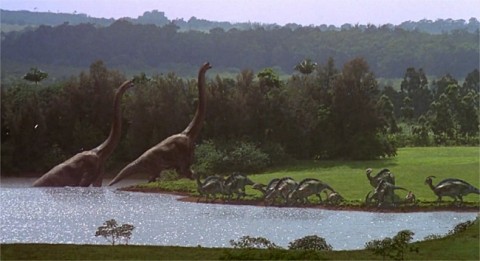 While 2015’s long awaited Jurassic World showed audiences what an up-and-running dinosaur theme park looks like, we still can't help but wonder how the original Jurassic Park might have transpired, had things have not gone awry back in 1993. Not that it’s impossible to imagine Hammond’s completed vision – you just need to fill in the gaps. Between the bestselling novel by the late Michael Crichton and everything we learn in the iconic movie adaptation, let’s do some digging and put together all the pieces to create an image of what guests would have expected for the original Isla Nublar resort upon opening.

We already know from the film that guests would have first been treated to a tour of the Visitor Center, the island’s central hub sat at a lake edge amid a palm tree setting. As well as a walk-through of the building’s museum-style atrium where there stood a mighty T-Rex skeleton, the tour included Mr. DNA’s short film about the method used to extract dinosaur DNA from fossilized amber. While our heroes abandon their seats at the Showcase Theater to witness a raptor birth, guests would have been forbidden from entering any laboratory for contamination reasons. In Crichton’s novel, the group also enters other areas of the labs, including a DNA Extractions room and a raptor nursery. Either way, seeing raptor infants, whether newly born or being born, was indeed intended to be part of the tour. Although the same can't be said about the adult versions…

We’ve now seen an Aviary twice in the films - the long abandoned one on Site B in 2001's Jurassic Park III and the attraction on Isla Nublar in Jurassic World. In the novel, following the power outage and T-Rex escape, Dr. Alan Grant and the two Murphy children find they have drifted into the park’s Aviary where pterosaurs (cearadactyls, to be precise) proceed to attack them. Constructed with the accompanying Pteratops Lodge inside, the Aviary was certainly going to be part of the tour. In Jurassic Park III, the mountain-sized, metal-framed structure seems to cage only pteranadons, whereas in Jurassic World, the glass-domed version houses dozens of species of the flying reptiles. The book’s Aviary, however, is described as having been made with struts, and instead of glass there’s only thin mesh inside to contain its inhabitants. Who needs electrified fences to contain prehistoric reptiles when you have mesh?

Now known for the legendary attraction at Universal Studios, the first ‘iteration’ of a Jungle River Ride appeared in the novel, which explored the island and passed through the Aviary (in Jurassic World, Cretaceous Cruise obviously takes inspiration, which sees river-bound guests admiring herds of hadrosaurs along majestic riverbanks). There’s also concept art for the original film depicting the book’s T-Rex chase through the river. Though the ride was yet to open within the continuity of the book, it still faced its own problems. It is said that employees are frequently attacked by pterosaurs, while dilophosaurs often spit their deadly venom at boats from the riverbanks. But it’s likely the Jungle River Ride would have opened anyway, seeing as InGen wasn’t even prepared to take raptors off the tour despite the death of a certain gatekeeper…

Jurassic Park’s resort hotel isn’t seen in the film, but it most definitely exists off-screen (unless guests are expected to sleep up trees...). Not only is it briefly mentioned, but it can also be seen in a UNIX System File under the label ‘Hotel’. In the novel, the characters check-in at the Safari Lodge, but after the power goes down, the raptors eventually escape and attempt to breach the hotel’s electrical barriers. As the Safari Lodge was pretty much up and running, there’s no doubt that this would have featured in the park a year later, along with Jurassic Tennis (which you can see on a background screen during the film’s dinner scene) and a swimming pool. As for the Aviary’s treetop Pteratops Lodge, despite the animals frequently attacking workmen, it probably would have opened anyway - you know, for consistency purposes.

The island tour of Jurassic Park would have undoubtedly been the main attraction. The unmanned Jungle Explorers navigated the park along a fixed track, passing enclosures belonging to Dilophosaurus, Triceratops and Tyrannosaurus Rex. Of course, there were more dinosaur exhibits than just these. As well as Brachiosaurus, Parasaurolophus and Gallimimus - which were available by gas jeep - other species intended for the tour were Stegosaurus, Metriancanthosaurus and Herrerasaurus, which can be seen on the embryos Nedry steals. And then there’s the official movie map, which includes even more enclosures. Meanwhile, the novel offers more on the tour too: Hypsilophodont Highlands, Sauropod Swamp, Carnivore Country, Stegosaur South and Velociraptor Valley, as well as of course the Aviary, to name but a few.

Unless we get a retconned follow-up to Jurassic Park that ignores all the sequels, unfortunately we’ll never see the original park in all its glory. However, there are ways for you to experience a fully functional Jurassic Park, or, at the very least, areas we never got to see in the film, whether it’s through the popular video game Jurassic World: Evolution or the experiences at Universal Studios.