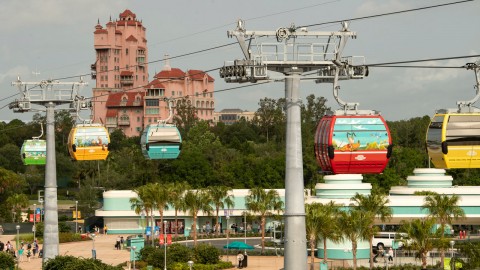 There are quite a few ways to get around Walt Disney World resort, thanks to complimentary transportation on property. The Disney Skyliner is the newest way to travel around the Most Magical Place on Earth, so we’re sharing a complete guide to the Most Magical Flight on Earth.

The Most Magical Flight On Earth

For decades guests have only been able to travel between two Walt Disney World’s four theme parks in the air, but in 2019 this changed thanks to the Disney Skyliner! This innovative mode of transportation offers guests a new, fantastic point of view of Walt Disney World while traveling between parks and resorts along the route. With three different lines of travel and five stations, this complimentary gondola-style transportation is one that every Disney guest will want to experience.

The best part of starting your Disney Skyliner journey is seeing which gondola you’ll end up in! Each bright and bold colored car makes for a fun conversation topic as you ride to your destination. Some cars even feature Disney characters from your favorite movies, attractions, and shows on the outside! It feels like you’re experiencing the Most Magical Flight on Earth with some extra special company.

The Disney Skyliner allows guests to travel between Epcot, Disney’s Hollywood Studios, Disney’s Caribbean Beach Resort, Disney’s Riviera Resort, Disney’s Art of Animation Resort, and Disney’s Pop Century Resort with ease thanks to their many Skyliner Stations. Disney’s Caribbean Beach Resort is home to the main station, offering three lines of travel to get to the other locations along the route. There’s an Epcot Line, a Disney’s Hollywood Studios Line, and a Disney’s Art of Animation/Pop Century Line. 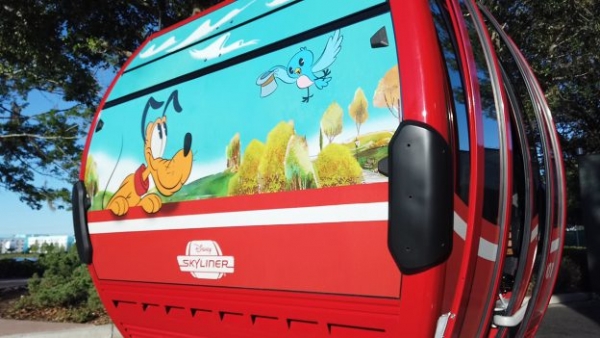 This Disney Skyliner Line is the longest of the three, stopping at two additional places along the way. If you start at Disney’s Caribbean Beach Resort on the Epcot Line, you’ll travel through the resort from the sky on your way to Disney’s Riviera Resort. At this stop you can either get off and visit the resort, or stay in your gondola to continue on to Epcot. If you continue on to Epcot, you’ll pass over the Epcot Area Resort Hotels and see great views of the park as you arrive into the station at the International Gateway.

The Disney’s Hollywood Studios Line is much less complicated in comparison! When you board your gondola at Disney’s Caribbean Beach Resort, you’ll take one quick and scenic ride to the Disney’s Hollywood Studios Station which lets you off right at the front of the park. Traveling back to Disney’s Caribbean Beach Resort is just as easy, taking the exact same route back from where you came! The ride time for this line is only 5 minutes one way.

This last Skyliner line is the shortest, and very simple too! As you board your gondola at Disney’s Caribbean Beach, you’ll get a bird’s eye view of the resorts passing the north building of Art of Animation on your way in. The shared skyliner station for these resorts is located right in the middle of Hourglass Lake, the body of water that separates the two from each other! Guests can travel right back to Disney’s Caribbean Beach again to get to their next destination by boarding here as well. The one-way journey on this line takes 4 minutes!

As you can see, the Disney Skyliner is a fun and different way to travel between parks and resort hotels on your next Disney vacation. It’s good to know that Walt Disney World is continuing to add ways to make their guests’ experiences even more exciting and convenient!

Kait is an Orlando lover from Louisiana. When she was 3, she visited Disney for the first time, and has now lost track of the number of times she’s visited! Kait quickly became a Disney expert among her friends and family, which lead her to spread her Disney wisdom to a larger audience via her Disney Lifestyle Blog, Kait Around The Kingdom. Walt Disney World is Kait’s happy place, and as an annual passholder, you can bet that she visits the Most Magical Place on Earth whenever she can. You can find Kait’s Disney adventures on Instagram and Kait Around The Kingdom.