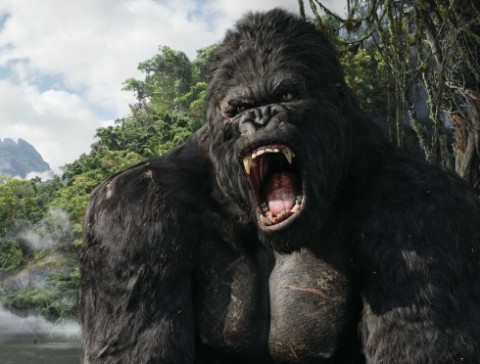 If there’s one character that has endured since the dawn of cinema, it’s King Kong. The “Eighth Wonder of the World” made his first silver screen appearance in the 1933 movie, in which an expedition discovers Skull Island. And we all know how the classic story ends: Kong falls for human woman – all the way from the top of the Empire States Building, to be specific. As well as the recent ‘MonsterVerse’ entries, there was a 1976 reboot and Peter Jackson’s epic take in 2005, both of which went on to inspire attractions at Universal Studios Orlando and Universal Studios Hollywood. So now that you’re all caught up on Kong in film, let’s look at his 35-year-long rampage through the theme park…

The first Kong-themed attraction had a few names, but was best known as King Kong Encounter. Based on the 1976 remake, the ride opened at Universal Studios Hollywood in 1986, and would later inspire Kongfrontation at Universal Studios Orlando. The ride transported guests into the studio backlot’s New York City via tour tram, where a news report detailed the devastation of Kong. Sirens blared out across the city and upturned vehicles littered the streets. The huge and genuinely terrifying animatronic Kong would investigate the tram, before the action concluded on Brooklyn Bridge. Sadly, the attraction was destroyed by fire in 2008, and Universal decided not to rebuild. However, an uproar from guests led Universal to build a new Kong-themed ride, which would arrive in the form of King Kong 360-3D in 2010.

Kongfrontation opened to the public in 1990 and, like its Universal Studios Hollywood cousin, rooted itself firmly at the park’s New York soundstage. Here, guests boarded an aerial tram at a recreation of Pennsylvania Station, while a news report described Kong’s attack on New York. Once in the city, guests were greeted with destruction – upturned trucks erupted with fire below and torn electrical cables sparked violently overhead. During the first ‘Kongfrontation’ - arguably the scariest version of Kong ever seen on an attraction - the tram was attacked. When guests finally escaped the second encounter on Queensboro Bridge, they were able to see themselves on a news report. The ride closed in 2002, but it wasn’t the airplanes killed the beast, nor was it beauty – it was apparently a combination of staffing, operating and maintenance cost challenges.

Based on Peter Jackson’s monstrously epic 2005 remake, King Kong 360-3D is a part of the Studio Tour attraction at Universal Studios Hollywood where guests enter a CG/3D/HD rendition of Skull Island. With your 3D glasses firmly on, your first encounter is a pack of the raptor-like Venatosaurs. Things get even more chaotic when the island’s V-Rexes make their appearance, which in turn draw Kong out of the jungle. Before beating his chest, the King beats the super predators to a pulp – but not before you plunge down a chasm choked with vines. Using two huge wide screens, the part of the Studio Tour is seamlessly panoramic, with the action switching sides throughout, all the while your senses are assaulted with wind, water, motion and the damp scent of the jungle. It’s a short and sweet experience, but a feast for any fan of the 2005 film.

Set on the Islands of Adventure, Skull Island: Reign of Kong is also based on the 2005 film by Peter Jackson (while also drawing on others in the franchise). This trackless ride pits guests outside the iconic temple gates, where an audio-animatronic savage native warns them of Kong. From that moment on, classic Skull Island mayhem ensues: giant bats lift screaming expedition members and grotesque, swamp-dwelling meat-weasels swallow people whole, and there’s some signature Kong-Vs-dinosaur action too, not unlike King Kong 360-3D. But what sets this ride apart from its Hollywood counterpart is the impressive audio-animatronic Kong at the end of the ride. Skull Island: Reign of Kong continues to rule over the Islands of Adventure.

The Future of Kong

With more recent adaptations such as 2017's Kong: Skull Island and this year’s mash-up sequel Godzilla Vs Kong, the great ape remains as relevant as ever. Though it would appear that Universal Studios has committed to Peter Jackson’s Kong, there may still be room for the newer version. With that said, Jackson’s Skull Island, a fantastical, out-of-control, natural dystopia, is more park-worthy than the MonsterVerse’s somewhat uninspiring depiction. Nevertheless, as for future attractions, something that echoes the ground-breaking theater production, King Kong: Alive on Broadway, could see Kong on stage where he would ultimately break free from his shackles to terrify guests. But a Godzilla Vs Kong-inspired experience wouldn’t be out of the question, either, with the film possessing the right ingredients for a theme park adaptation.

There may be no real ‘winner’ in this year’s Godzilla Vs Kong, but when it comes to Universal Studios, it’s fair to say that Kong is King.