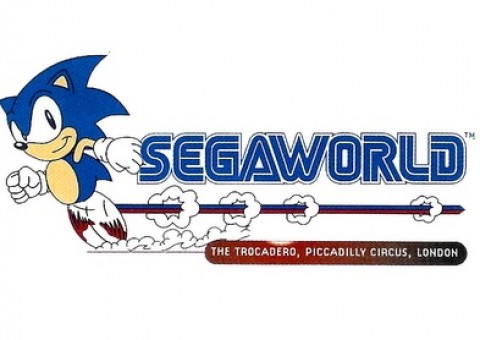 "Welcome to the next generation of indoor entertainment!"

That's how Sega billed Segaworld, the new attraction that it planned to open in the Trocadero in London's Piccadilly Circus in summer 1996. Covering 100,000 square feet and split across six floors, the attraction would be "the largest indoor theme park in the known world".

Inspired by the similarly-themed Joypolis in Tokyo, Segaworld would cost an eye-watering £45 million to construct. But Sega claimed that that was just the tip of the iceberg - over $1 billion of research and development had led to this point. Londoners were about to have their minds well and truly blown by a "new era of indoor entertainment".

A deal had been struck between property entrepreneur Nick Leslau (who now owns Alton Towers and Thorpe Park, which he leases to operator Merlin) and Sega to bring Segaworld to the Trocadero back in 1994. At the time, Sega was riding high on the popularity of the Mega Drive (as the Genesis was known in the UK), and Sonic the Hedgehog was almost as famous as Santa Claus himself. Surely this venture was a sure-fire success?

Let's take a step back in time and enter Segaworld circa 1999, three years after it opened! 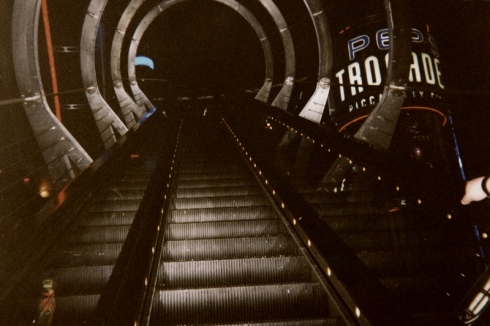 We enter Segaworld via the "state of the art" rocket escalator, which carries us up to the sixth floor. 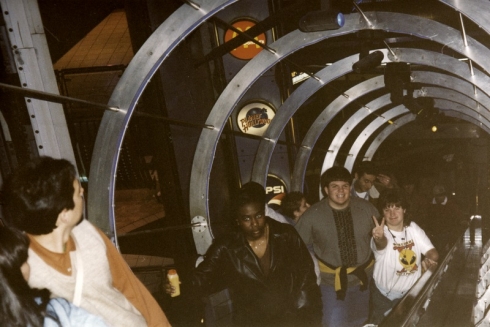 "You have travelled up the many floors of the Trocadero to arrive at Segaworld. You have six different themed levels to wind your way through before eventually you arrive back at the bottom. Pick and choose the games and rides as you go - just follow the escalators and travelators!"

So promises the leaflet in our hand. Here on the reception floor we can grab our ride tickets, which are priced at £8 for a Multi-Ride Pass (covering 4 rides) or £15 for a Family Pass (including 8 rides). Alternatively, we can pay between £2 and £3 per ride.

There are more than 400 video games and simulators in Segaworld, too, all on a pay-as-you-play basis. A game costs between 20p and £1. Here on the Reception floor, there are even shiny new Sega Saturn units to try out for free!

The headline attraction on the top floor is Beast in Darkness. Sega promises: "Deep within the earth's core lurks a terrifying beast...hungry for freedom, its favourite snack is children, who will be most welcome in this world of shadows." Like most of Segaworld's other rides, it's a motion simulator. 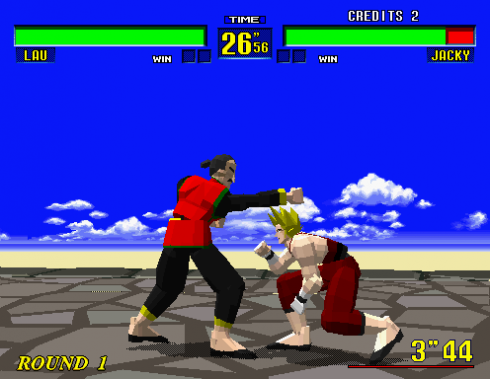 There are no rides on this floor - just fighting games. 50 of them, including classics such as Virtua Fighter. This is also a handy place to fill up on change.

As the name suggests, this floor is heavy on racing games - with more than 70 on offer. It's also home to our second ride, Aqua Planet. "A whole new 3-D world awaits you in the depths of the ocean," promises Sega. "Watch out for larger than life threats and be prepared for the fight of your life to escape." 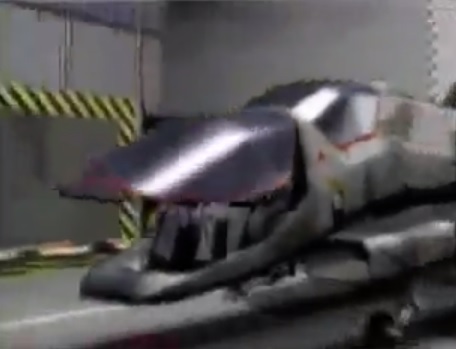 Heading off on a Space Mission...

No prizes for guessing that flying games are the main attraction here - along with a real Harrier Jump Jet. The highlight for theme park fans is our next ride, Space Mission. Our top secret mission is to deliver vital information to the planet Basco. We take the role of Chief Gunner, destroying anything in our way.

The big new addition for 1999 was "London's fastest dodgems". These bumper cars were themed around Dr. Robotnik, Sonic's arch-nemesis.

This floor offers more than 80 family games, many with prizes on offer. It's also home to no fewer than three rides. The first, Powersled, sees us joining in the Powersled Winter Olympics for "an exhilerating journey through a specially-designed, snow-packed bobsleigh course at speeds of over 100kph". 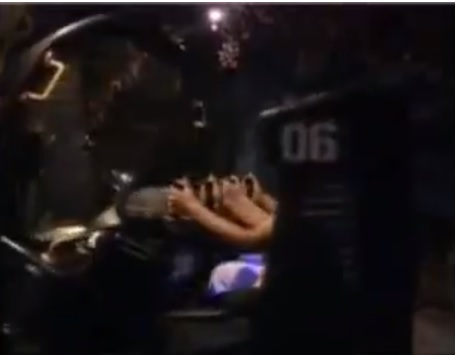 Hunting down ghouls on Gost Hunt.

Next up is House of Grandish, where we battle horses of zombies. The similarly-themed Ghost Hunt sees us entering a haunted house, hunting down ghost and ghouls that "lust for our blood". 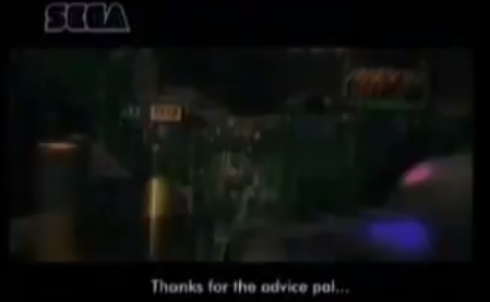 Blurry action in AS-1.

The final floor offers 90 sports games, and the headline ride of Segaworld: AS-1. Here we must "defend our mothership from enemy fire or join the car chase of our lives to recapture arch terrorist Brute Bombalez."

Segaworld was not the success that its owner had hoped - in fact, in many ways its fortunes mirrored that of Sega itself. Nick Leslau, for his part, was discouraged about the park's prospects from its opening day, saying: "Sega could not deliver what they said they'd deliver. It looked amazing, but their rides were not capable of delivering the number of people they needed to deliver to support the operation. People were queuing for ages. It was a question of over-anticipation and under-delivery."

Just one year after Segaworld opened, Leslau and his business partner Nigel Wray bought back the lease. Three years later, they renamed the entire establishment as "Funland", which was already the name given to the arcade in the basement floor below Segaworld. The basement soon shut, with the upper floors operating until 2002, when a vending machine was hastily placed in front of the Rocket Escalator.

Sadly, there'll be no return for Segaworld or any similar attraction in the Trocadero. Not only is the arcade industry in decline, but the Trocadero itself will close for good on February 25, 2014. It's due to be replaced by a luxury hotel.

Do you remembering visiting Segaworld? Share your memories in the comments section below!

I recall visiting SegaWorld once with my family as a child then in 96/97 onwards until its closing i frequently visited Funland witu friends to play on the variois arcade machines mostly Dance Dance Revolution, Pump it Up and Para Para Paradise and well as entering the King of Styles 2 DDR freestyle tournament.

This venue had been sorely missed since its closing. I wish there was some way to restore it and reopen the attraction

London has too many Hotels as it is

I was too young to remember segaworld or funland but my understanding is that tenpin bowling in Acton used to be sega park acton in the 90s , I've been there twice and would loved to have gone to a sega themed arcade

SegaWorld was never popular. Ever. The Trocadero arcade that predated Segaworld was much more popular and the scene in 1993/1994/1995 was extremely exciting since the Fun Land (which wasn't just in the basement - it spanned at least two floors if I recall), & it was this period in which some of the most popular arcade games of the 90s came out. Super Street Fighter 2 Turbo, Mortal Kombat 2 and 3, Killer Instinct, Daytona USA, Sega Rally, Tekken, Virtua Fighter 1 and 2, & even Virtual Racing. All of these games were already there. SegaWorld actually offered nothing new and made the whole experience much more expensive since the arcade was previously had free entry. They even had the massive Ridge Racer machine with a car and projection screen and these were easily accessible. I certainly have a lot of nostalgia but when Sega World open, Fun Land moved became smaller and the most luxurious machines were moved into Segaworld which was more or less a rebranded Fun Land (because with the exception of the rides, which were of very little interest to those who frequented the place for games), it was the same experience for which people had to pay more. In this article, Virtual Fighter is mentioned. By the point Segaworld opened, this game was old. However in 93/94, this game generated a lot of excitement as did many of the new games thag predated Segaworld. The nostalgia and affection people associate with Segaworld is misplaced since Segaworld heralded the end of the Trocadero's arcade and most people remember these classic games, yet they had very little to do with Segaworld since most were there before and had been played a lot by the time Segaworld opened. A lot of people went there to play games and playing was reasonably expensive and getting a ticket to play games sounded like a rip off. Some people might have good memories of the rides but before Segaworld opened people went there for the games and the Segaworld experience just added things gamers neither wanted nor wanted to pay for. It was a bit like paying extra for an Xbox One to get a Kinect that very few people wanted. Most people saved their money and instead went to the other local arcades, and Fun Land never recovered. My best memories of the place are from the time before Segaworld, and it was almost exactly the same experience without the silly rides. A day out in London in those days was expensive enough (train tickets, game credits getting much higher than most kids/parents wanted to spend, food, drinks, and other trinkets you may pick up on your day out), and Segaworld was not a good business model.

Ahh really? That article sounds awesome! Yes, I remember as a kid being amazed with seeing a roller coaster indoors, that went into a hole in the side of the wall. I also remember a haunted house dark ride exterior that I was too scared to go in!

Such a shame the building is closing down for good. Was there ever a roller coaster there? I vaguely remember one. Perhaps it was a simulator?