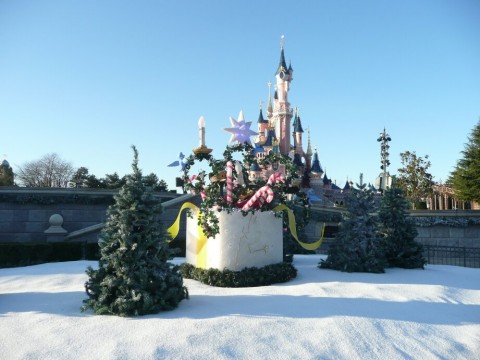 The Disneyland Resort Paris has once again dressed itself up for Christmas season, with Mickey Mouse and Santa Claus joining forces to entertain thousands of guests at its two theme parks. A host of special events are laid on to help generate a festive spirit - but were the Enchanted Christmas 2011 events worth braving the large crowds and icy-cold temperatures for?

We attended last year's events, which were boosted significantly by the presence of several inches of real snow. While there was no such visual spectacle this year, visitors were at least able to reach the park without facing the hazards of slow-running Eurostar trains or frozen airport runways.

Overall, the crowds at Enchanted Christmas 2011 were similar to the 2010 events, leading to relatively large queues for major rides. However, these were fairly easily avoided by arriving early, making use of the free FASTPASS system and hitting the most popular rides first-thing or late in the evening.

The focus of Enchanted Christmas is very clearly Disneyland Park, with sister park Walt Disney Studios receiving only a smattering of decorations. The line-up of special events includes a festive show, an extended parade, a Christmas tree-lighting ceremony and a chance to visit Santa in his grotto.

While there is no real snow at Disneyland Paris this year, there is still plenty of the fake stuff. Several areas that are usually grass-covered are instead gleaming white, while an enormous number of twinkling lights adorn shopfronts, restaurants and in some cases attractions themselves. It looks pleasant enough during the day, but the park really comes to life at night when the blaring Christmas tunes and dazzling array of lights produce a hugely impressive spectacle. 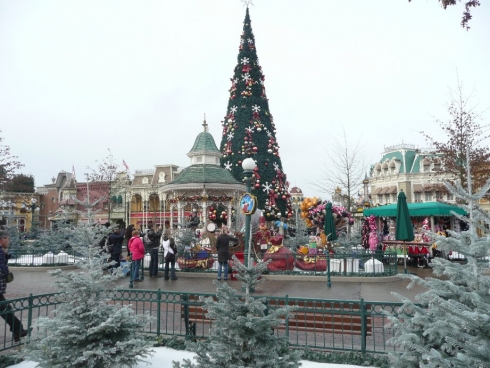 Main Street, USA is one of the most heavily decorated areas of Disneyland Paris.

The majority of the decorations in Disneyland Park are centered on Main Street, USA. As in previous years, the centrepiece is a giant Christmas tree in front of City Hall, with the spectacular Sleeping Beauty Castle being lit up in a special ceremony later in the day. 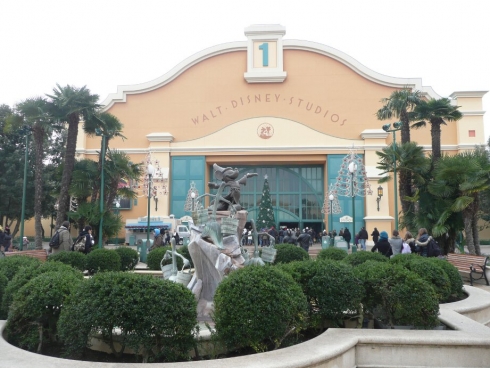 The decorations at Walt Disney Studios are lower-key.

Walt Disney Studios is a less obvious setting for a holiday celebration, and the Disneyland Resort Paris appears to accept this. It has at least made the effort to dress up the entrance plaza in front of Studio 1, relocating the Christmas tree to this area and adding some token decorations inside the building itself. 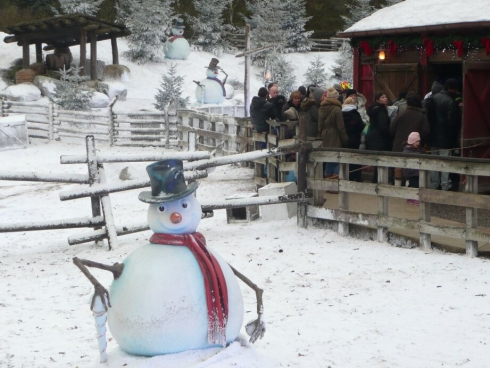 Meeting Santa Claus in a department store is one thing, but meeting Saint Nick in his own village in the heart of Disneyland Paris is quite another experience. Taking over the Woody's Roundup Village area of the park, Santa's Village does a pretty good job of convincing kids that they are in the North Pole, rather than the Wild West. Be prepared to queue to get into Santa's Grotto itself, though - it is, predictably, very popular. 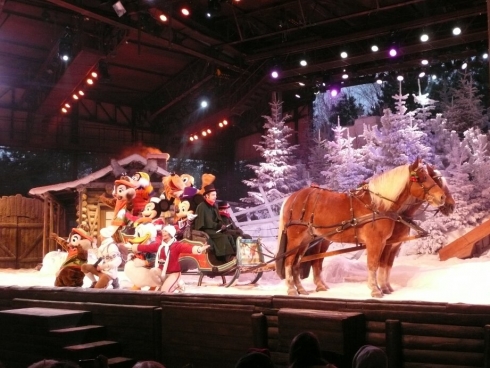 Returning for another year in the Chaparral Theatre next to Santa's Village, Mickey's Winter Wonderland is a live show mixing Disney characters, singing, dancing and even figure skating. The plot, such as it is, is pretty secondary. Instead, the focus is on a host of Disney favourites (including Mickey, Minnie, Pluto and Donald), dancing and ice skating to a range of classic tunes. Adults may find parts of the show a little nauseating, but it's difficult to argue with the smiles it puts on the faces of younger children.

Disney's Once Upon a Dream Parade

Though it operates year-round, the Once Upon a Dream parade at Disneyland Park does receive an extended ending during the Enchanted Christmas events. Known as Disney's Dreams of Christmas, it essentially takes the form of an extra float featuring Santa Claus. 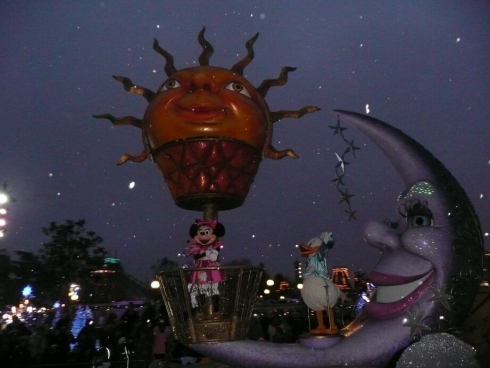 If you're a fan of parades (and we're not), you'll know what to expect: cheerful tunes, repetitive waving and jostling for position by agitated parents. While we feel that you'd be better off taking advantage of the shorter queues for popular attractions while the parade is underway, if your kids are insistent on watching it then we suggest taking up a position close to the Central Plaza in front of Sleeping Beauty Castle. This puts you in prime position to make a quick escape into one of the park's themed lands when it reaches its conclusion.

Lighting up the park 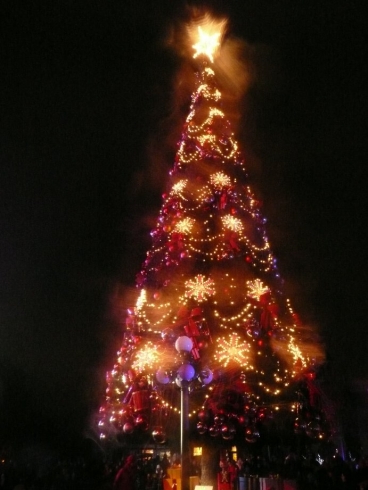 The Christmas tree lighting ceremony is well worth watching.

Two nightly ceremonies are held at Disneyland Park to light up some of its more prominent Christmas decorations. Unlike the parade, we rate these as not to be missed. Both feature a range of Disney characters, tap-along Christmas tunes and genuinely impressive lighting displays. They are also mercifully short, and you can afford to turn up 5 minutes in advance, as opposed to half an hour or more for the parade.

The first ceremony sees the Christmas tree in front of City Hall being illuminated, and is preceeded by a short song-and-dance routine by Mickey and friends. The second, which is by the far the most impressive, is dubbed Princess Aurora's Christmas Wish. This sees the princess's three godmothers light up Sleeping Beauty Castle in a dazzling array of colours, and is an improvement on 2010's already-excellent offering.

While it doesn't feature the range of holiday overlays for major attractions that make Christmas at Disneyland California so special, Disneyland Paris does still put a lot of effort into its festive celebrations. Although Walt Disney Studios remains very much the poor relation at the resort, spending a day or two among the decorations at Disneyland Park is an experience kids (and many adults) will never forget. 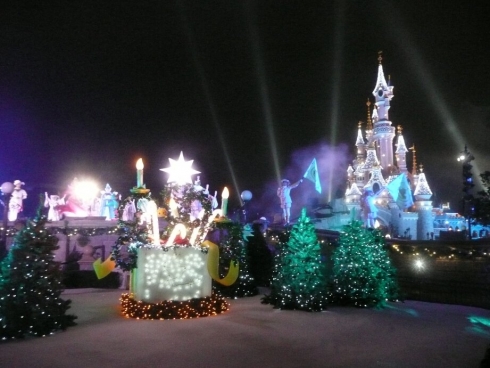 Sleeping Beauty Castle at Christmas is one of Disney's most impressive creations.

If you're planning on visiting Disneyland Paris over the Christmas period this year or next, planning in advance can save you a substantial amount of money. There are few large discounts to be had on tickets, but travel and accommodation can often be considerably cheaper when booking early. In particular, the Eurostar offers a reasonably-priced option for UK visitors and an array of low-cost airlines fly to Paris from all around Europe. Budget-friendly accommodation options can be found just a few train stops away.

There are few better places to spend the build-up to Christmas than at Disneyland Paris. For us, it's Disney's most beautiful resort, and the addition of the extensive lights and decorations only serves to make it even more visually stunning. If you're planning a trip to the resort in 2012, consider making it in December.

Just returned from an enchanted christmas. Whilst the parks are fun (nothing compared to the atmosphere in DWF or California) there is a real let down by the attitude of many who work there, the fact that everyone smokes and throws their cigarettes all over the floor and poor organisation on many ques allowing for several que jumpers. Not a real Disney experience. Recommend you spend a little more and go for the real thing in America.