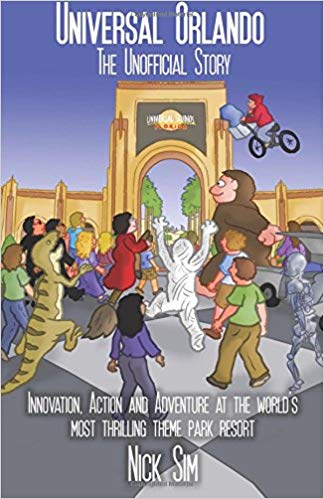 Discover the amazing true story behind the world's most thrilling theme park resort!

In the late 1980s, Universal decided to construct its first real theme park - right in Disney's backyard of Orlando, Florida. At the time, the company had never built a single theme park ride. Many predicted that it would be a disaster.

It very nearly was.

On Universal Studios Florida's opening day in 1990, all three of its major rides malfunctioned. Thousands of guests demanded refunds. And it got worse from there - eventually, the $30 million Jaws ride was closed completely. It was three years and a further $40 million before it could reopen.

Through a combination of outrageous risk-taking, technical ingenuity and sheer persistence, Universal eventually carved out its own niche in Orlando. For the first time, Universal Orlando: The Unofficial Story reveals how the resort's incredible, ground-breaking rides were created, from Kongfrontation to Harry Potter and the Forbidden Journey.

Go behind the scenes at Universal Orlando!

Whatever your questions about Universal Orlando, this book has the answers!

As well as detailing the amazing special effects that are employed by the rides at Universal Studios Florida and Islands of Adventure, Universal Orlando: The Unofficial Story is also packed with "hidden secrets" that you can look out for during your next visit. Want to know where you can rent a time machine, or how to boost your score on Men in Black: Alien Attack? Look no further!

Update: The book has been fully updated for 2014, adding the story behind the creation of The Wizarding World of Harry Potter - Diagon Alley.

What readers are saying about Universal Orlando: The Unofficial Story

"Universal Orlando: The Unofficial Story is the only book currently available that covers the complete history and creation of the resort, from the onset to the present day. I was a bit skeptical because it is a self-published book but I was blown away with how good it was." - Amusement Authority

"Universal Orlando: The Unofficial Story is the ultimate book about the creation and development of the Universal Orlando Resort. Relive the history of the resort from conception through the present day including all the bumps in the road along the way." - Coaster101.com

"Wow. Being a huge Universal Orlando fan myself, reading this book was truly amazing. I learned things I never knew about UO. Kudos to the author and thank you for writing this book. I truly recommend it to any Universal Studios fan!" - Amazon.com reviewer

"I can't say I have ever read a book that has captivated me like this one did. I absolutely could not put it down. Fascinating." - Amazon.co.uk reviewer

"Amazing book to showcase the history of Universal. Nothing else like it, so many about Disney but nothing on Universal." - Amazon.com reviewer

"This book was an excellent look back at the history and struggles Universal Orlando faced as it tried to find its place in the Orlando theme park market." - Amazon.com reviewer

Universal Orlando: The Unofficial Story is available in paperback format from Amazon.com or Amazon.co.uk, or you can download it instantly to your Amazon Kindle or a Kindle app on your tablet or smartphone via the Kindle Store (or via the UK Kindle store). You can even start reading right away for FREE by downloading a sample to your Kindle.

What are you waiting for? Start reading now and enjoy an adventure through time as you discover how Universal Orlando developed into a place that has entertained tens of millions of people over more than two decades.