Tales from the Towers: The Unofficial Story Behind Alton Towers 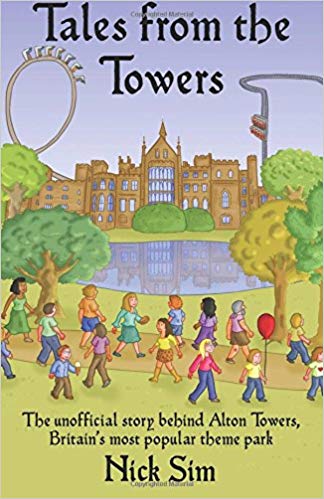 Discover the amazing true story behind the world’s most extraordinary theme park!

A two hundred-year-old mansion, decaying and largely abandoned. A deep, foreboding valley hosting pretty gardens and dozens of bizarre and unusual structures. A terrifying plunge into Oblivion, and a mysterious alien beast known as Nemesis.

All of these things can be found in one truly unique place: Alton Towers. But how on earth did they get there? The story behind the UK’s most popular theme park is just as thrilling and full of twists and turns as the rollercoasters that attract millions to the park every year.

Prepare to be sucked into a tale of daring invention, personal tragedy, wanton destruction and brilliant creative minds…

"While in reality, this is a work of non-fiction, recounting true events and factual details, it captivates and engages readers like a fantasy story." – Airgates Attraction News

Two hundred years ago, a wealthy earl began the transformation of a barren patch of land in rural Staffordshire into the site of a stunning gothic mansion surrounded by eye-wateringly beautiful gardens. Mocked and ridiculed by his peers for his strange tastes and outlandish ideas, he nevertheless succeeded in attracting people from far and wide to come and marvel at his creations.

Less than 50 years later, the house stood desolate and empty. The genius architect who had helped the earl’s successor complete his vision lay dead at 40, having spent many of his final months incarcerated in London’s brutal Bedlam mental asylum. How had the mighty fallen so far, so fast?

It didn’t end there. The earl’s descendants fought bitterly over Alton Towers – and with each other – until finally the near-ruined property was sold into private hands in the 1920s. In Tales from the Towers, you can experience what it was like to visit the estate in its early years as a tourist attraction, when spectacular fetes, fairground rides and exotic animals were all part of the appeal.

Finally, you’ll find out how an eccentric property developer was able to gain control over the Towers and convert them into Britain’s first theme park. You’ll learn about the astounding successes that followed, such as the day that riders queued for nine hours to ride the park’s first major rollercoaster. And your eyes will widen with amazement as you uncover how the owner’s empire came crashing down when he tried to convert one of London's architectural icons into a truly astonishing second theme park.

As well as documenting – for the first time – the full and fascinating history of Alton Towers, Tales from the Towers also explains exactly how the park’s most popular rides – such as Nemesis, Oblivion and The Smiler – were created. It even takes an in-depth look at rides that were designed for the park but never built, enabling you to take a voyage of discovery and imagine what might have been.

Add a new dimension to your Alton Towers experience

Whatever questions you may have about Alton Towers, Tales from the Towers has the answers!

Not only that, but the book is peppered with unusual and interesting facts about the park. You can keep your eyes peeled for the many "hidden secrets" that it highlights during your next trip, adding a fun new dimension to your visit.

What reviewers say about "Tales from the Towers"

"This excellent book may call itself the UNOFFICIAL story behind Alton Towers, but actually it has the merit to become the OFFICIAL story. It is meticulously researched, well-written, and highly insightful. I had assumed that I would find within the sections of the story that involved my work many inaccuracies and myths, but nothing could be further from the truth. It tells the story exactly as I remember it happening!" - John Wardley, creator of Nemesis, Oblivion and Air and author of Creating my own Nemesis

"This is a book that anyone interested in Alton Towers should get their hands on." – Adam Perry, altontowersmemories.net

"The book adds a new depth to the Alton Towers experience, and is a must-read for any park fan." – Airgates Attraction News

"The level of detail about the park is incredible, everyone will enjoy it." – RideRater.co.uk

"If you've ever wondered how the park came to be what it is today, what it could have been in the past, or even what could be coming in future - this book manages to tell it all." – TowersStreet.com

Tales from the Towers is available in paperback format from Amazon.co.uk or you can download it instantly to your Amazon Kindle or a Kindle app on your tablet or smartphone using the Kindle Store. You can even start reading right away for FREE by downloading a sample to your Kindle.

What are you waiting for? Start reading now and enjoy an adventure through time as you discover how Alton Towers developed into a place that has entertained tens of millions of people over nearly two centuries.

Learn about the Grand Fetes that drew enormous crowds to Alton Towers back in the late nineteenth century, and their 1970s equivalent: The Mirror Days.

The iconic Corkscrew helped established Alton Towers as leading tourist attraction - find out more about the classic coaster and its impact.

Owner John Broome planned to turn Trentham Gardens into a "sister park" for Alton Towers in the early 1980s. Read all about what would have been constructed as part of "Project Trentham".

Trentham wasn't the only sister park that John Broome hoped to build. Find out all about his plans to convert London's Battersea Power Station into a theme park - including images that have never before been published online.

Revealed: Tussauds' plans to convert Woburn Abbey into a major theme park, before it abandoned them and bought Alton Towers instead.

Take a look at plans for John Wardley's infamous Cross-Valley Coaster, a stunning wooden creation that would have raced through Alton Towers' woodland.

Alton Towers has offered some strange merchandise over the years. Here are a few nice examples!

The Alton Towers estate dates back hundreds of years, and there are many hidden secrets dotted around it. Discover some of them here.

Learn all about John Broome's plans for Alton Towers Village - the hotel complex that never was!

Alton Towers' success in the 1980s attracted a host of rivals. One of the most prominent was Britannia Park - but it only lasted a few months before shutting its gates. In the Tales from the Towers book, you can read all about plans for Wonderworld in Corby, a mythical park that was expected to attract upwards of ten millions visitors every year.

The Legend of Hex

Hex - The Legend of the Towers tells the story of a cursed oak tree draped in metal chains. But is the legend real?