From imagination to application 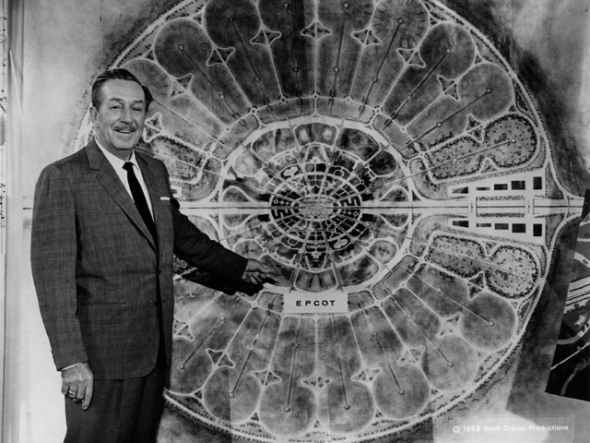 In Walt’s mind, the entire purpose of his “Florida Project” didn’t have anything to do with castles, princesses, or pirates. As usual, Walt was thinking bigger. And while he would build a “Disneyland East” theme park in order to gain the governmental control he sought, his plan was always to turn Central Florida into his Experimental Prototype Community of Tomorrow. This EPCOT was a true city that Walt imagined would become the blueprint for all modern cities to be built after, internationally.

And though Disneyland had allowed him to experiment with transportation technologies as mere “rides,” those systems now prototyped and approved could actually be applied to Disney World and its EPCOT.

While Disneyland had been built in the era of automobiles, the Florida Project would be a child of the aviation age. So when guests landed at the Disney World Airport, their first step would be onto a Monorail, as real as New York’s subways or Tokyo’s train system. This Monorail would accelerate away from the airport and pass through EPCOT. Guests disembarking would find themselves in the cavernous cities interior, with a dozen Peoplemover tracks whisking guests out of the center of town and into neighborhoods, shopping districts, parks, and more, like arteries radiating out from a heart.

You see how the rides Walt and his designers had experimented with at Disneyland were set to become full-fledged, authentic, applied means of transportation at Disney World?

Of course, we know what happened – Walt’s unexpected death in 1966 sidelined any hopes of Walt Disney Productions attempting such an ambitious, costly, and ambiguous project as building a futuristic city. Instead, Disney World’s anchor would be the planned “Disneyland East,” eventually named Magic Kingdom. 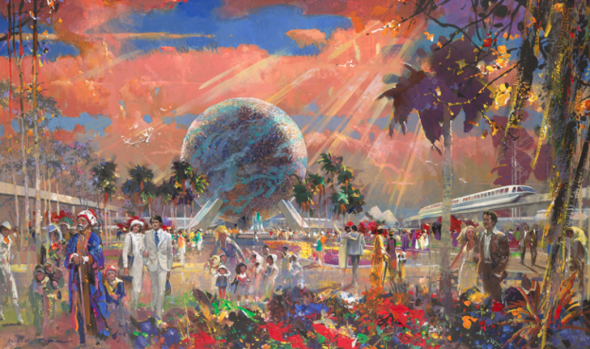 (EPCOT Center would eventually open, indeed connected via Monorail to the resort’s transportation hub… but this 1982 theme park merely merged the “core ideas” of EPCOT the city with a World’s Fair, albeit dedicating an entire pavilion to the millennia-long development of human transportation – the Lost Legend: World of Motion.)

When designers got to work on the Magic Kingdom, one of their first responsibilities was to determine which attractions should make the jump from Disneyland. Perhaps it’s surprising that – 15 years after its Californian debut – the Skyway was still fascinating enough to warrant inclusion in the new Floridian park!

The Skyway opened alongside Walt Disney World on October 1, 1971, and like Disneyland’s, the one-way trip was from and to Fantasyland and Tomorrowland. Read to step aboard? 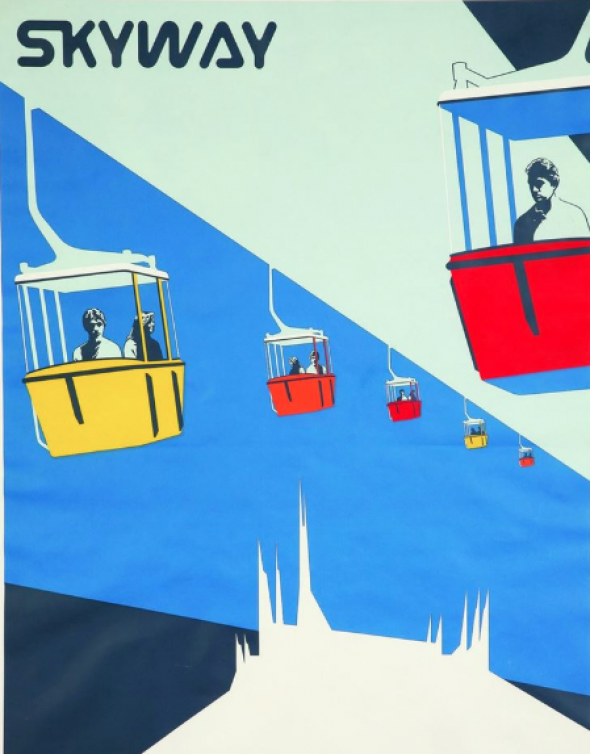 Our journey through the skies of Magic Kingdom can begin at either Fantasyland or Tomorrowland's station, with each appropriately designed to fit into the area. Since flying into the future has a certain ring to it, we'll begin here in Fantasyland. Just outside of the bright, pastel, medieval faire tournament tents of "town," a forested grove contains a towering Swiss chalet up on a hillside. Perhaps the most fairytale sight offered in all of Fantasyland, this charming little plaza is floated over by a continuous stream of bright, colorful, rectangular "buckets" launching from the chalet's upper level.

The line probably won't move very quickly, but at least it's pleasant to relax in the switchbacks of the forested grove, gently ascending alongside a babbling brook to the wood and stone lodge. 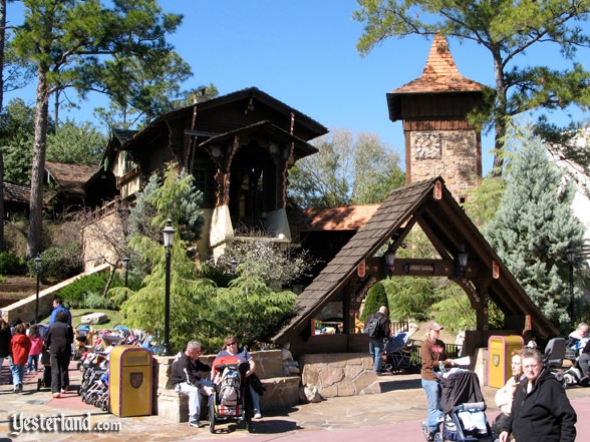 Even opening with the four-person gondolas that Disneyland only recieved in 1965, the Skyway to Tomorrowland is still a low-capacity attraction, especially for the "Vacation Kingdom of the World." Each gondola can hold 4 guests (or a maximum of 700 pounds). Once guests are seated, the Cast Member closes the door to the open-air cabin and gives it a push along the rail it's suspended from. A mechanism holds the cabin in place until its dispatch interval, then releases the cabin to slide onto the continuously-moving wire that circulated between the stations. 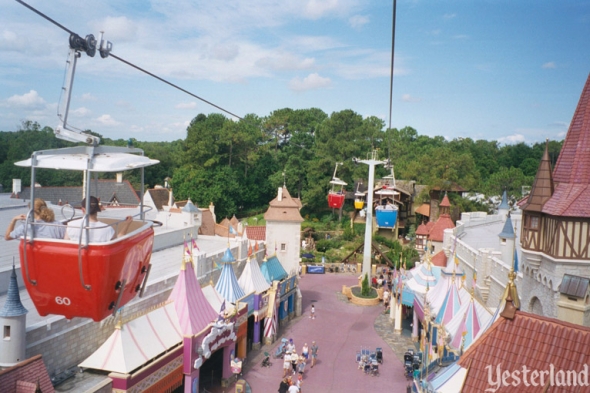 The cabin dips and sways for a moment as it's lifted skyward, gently rocking in the breeze. The Skyway silently floats down the center of Fantasyland's western path. If you look to the left or the right, you might spoil some of the "illusion" of Fantasyland.

After all, the park's guest-facing facades don't tell the whole truth... From this vantage point, it's clear that the charming storybook tents, village facades, and tiny shops of Fantasyland actually conceal massive, industrial showbuildings covered in not-so-beautiful HVAC units. Peter Pan's Flight even shares a showbuilding with the Hall of Presidents and the Mickey Mouse Revue (or the 3D Magic Journeys or Legend of the Lion King, depending on when you ride). Similarly, the Lost Legends: Snow White's Scary Adventures and Mr. Toad's Wild Ride are actually in the same building! 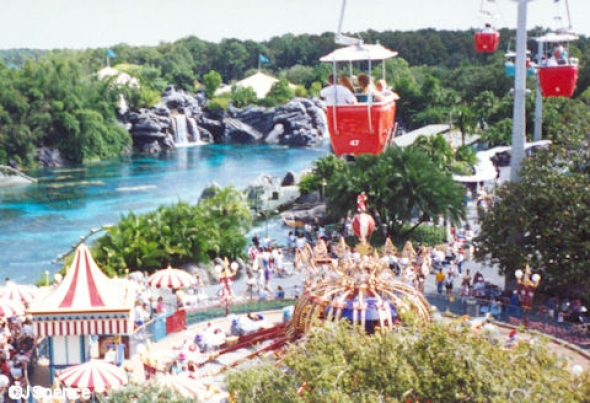 But now, the Skyway continues its climb, gliding over Dumbo the Flying Elephant and alongside the crystal clear waters of the park's most famous Lost Legend: 20,000 Leagues Under the Sea. A fleet of the steampunk Nautilus ship depicted in Jules Verne's 19th century novel (and brought memorably to life in Disney's 1954 film adaptation) slices through the water en route to the deep ocean, and from here, you can get a hazy glimpse of the coastal reef that guests onboard are passing through.

As Fantasyland fades from view, the Skyway begins to make a descent. It may appear that our floating gondolas are headed for landing in the Lost Legend: Mickey's Toontown Fair, but the ride is simply making a quick swing through a turn-station located closer to ground level. 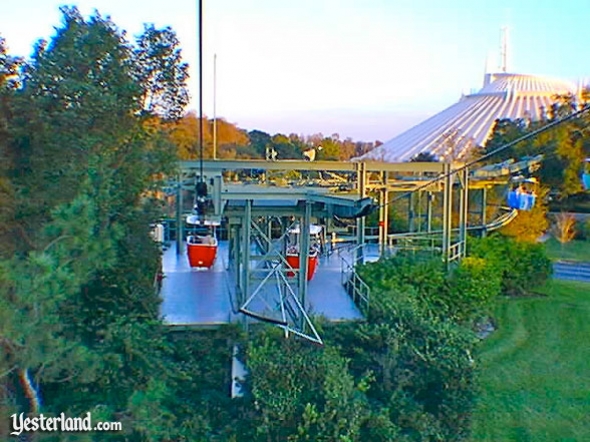 There, a Disney Cast Member waves hello as the click-and-clang of the station switch vibrate the gondola. Then, you're off once more, now surrounded in the sounds of revving engines at the Tomorrowland Indy Speedway.

The sputtering vehicles rumble through the trees as the gleaming, white, classic Tomorrowland arrives, with its own covered Peoplemover highway twisting around and through its showbuildings. Here, stark, white, industrial rooftops at least make sense. 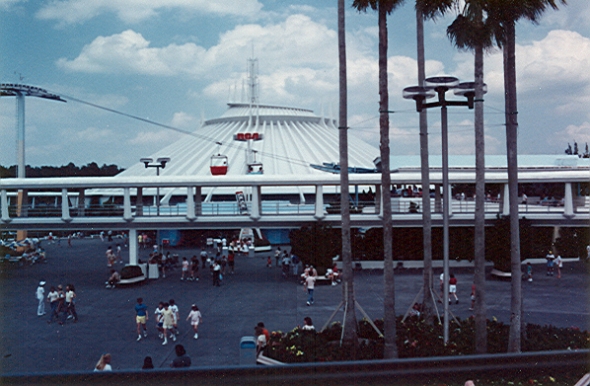 And besides, all eyes must be drawn toward the orbiting Rocket Jets (and later, Astro Orbiter) high atop a pedestal, just as they are and always will be at Disneyland. And for most of this ride's life, the real view worth seeing would be of the towering Space Mountain, with its white, conical structure just asking to be explored.

The Skyway comes to a smooth, ever-moving landing in Tomorrowland, where – as in the Disneyland original – the massive counterweight keeps the perfect tension on the park-spanning cable. 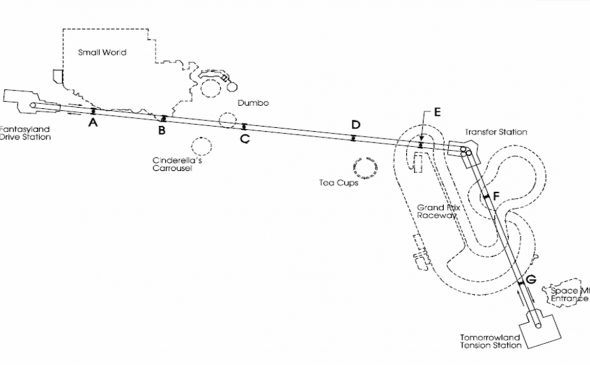 The one-way journey between Fantasyland and Tomorrowland takes only four minutes. And while the experience on the Skyway might not be your typical Disney adventure, it's an adventure nonetheless.

Here's a point-of-view video taken during the ride's penultimate year to help you see, hear, and feel exactly what a trip to Tomorrowland aboard Magic Kingdom's Skyway was like... Sit back, relax, and enjoy the flight...

Many of them featured aerial skyways… Enough, in fact, that guests might’ve assumed that the rides at Disneyland and Magic Kingdom were simply off-the-shelf attractions rather than the engineering marvels they truly were. 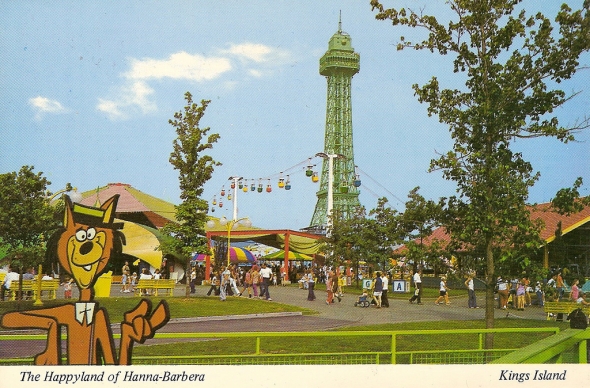 In some ways, the fate of the Skyway isn’t so different from the Monorail or the Peoplemover. Though Walt had installed these sincerely brilliant transportation systems at his theme parks merely to propose their real-world use, they became so closely associated with theme parks that they never really made the jump to actual cities.

Perhaps the Skyway’s story is cut from the same cloth. Though Skyways could’ve become a smart intra-city transport option between city centers and sports venues; to cultural attractions; among university buildings; from parking lots to malls, the technology instead became too synonymous with theme parks to be considered for actual, practical application.

Seemingly embracing its now-cemented theme park identity, Disney even played with incorporating a modern sky-ride at Disneyland Paris in the 1990s.

There, the ride would become thematically wrapped into the park's retro-futuristic, Jules Verne inspired Discoveryland (a European-friendly Tomorrowland replacement). The Hyperion Skyway was drafted as a ride that would allow guests to sail over the rocky, bubbling pools of Discoveryland on steampunk-stylized airships. 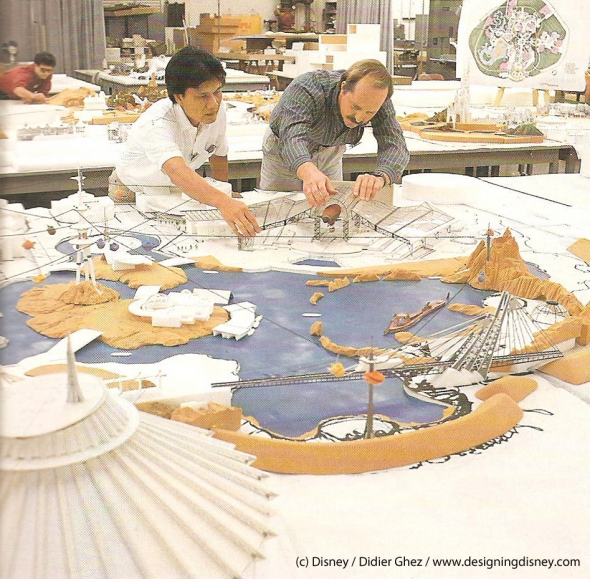 Needless to say, Discoveryland was soon reigned in by the realities of finance. The Hyperion Skyway didn't make it into the final Disneyland Paris, and the 1990s are marked by the end of the sky-ride transportation system at Disney Parks rather than its revival.  On the next page, we'll take a look at the closure of both Skyways in Disneyland and Walt Disney World. But don’t lose hope! The story is about to come full circle… Read on…