Right after news broke about a new upcharge experience that will bring $700 rental tents to the Magic Kingdom, Disney has announced another upcharge experience that will be coming to this park in just a few days. And while this is an all-new experience, it is at least one that will feel a little bit more familiar for Walt Disney World regulars, and takes the format of a dessert party with reserved seating for Walt Disney World’s last remaining parade: the Festival of Fantasy. But unlike other dessert parties that have been offered in the past, this one will involve the almost multi-hour closure of an iconic Magic Kingdom attraction during regular park hours... 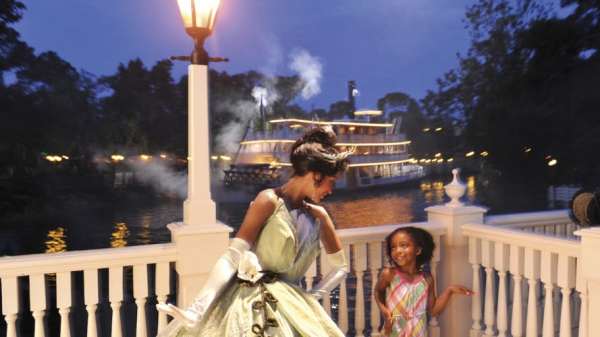 Beginning November 29, Disney will begin hosting a special upcharge experience every day on the Liberty Square Riverboat attraction at the Magic Kingdom. Available for $49 per adult and $29 per child age 9 and under, guests who want to take part in Tiana’s Riverboat Party Ice Cream Social & Parade Viewing will be able to enjoy not only guaranteed viewing of the Festival of Fantasy parade, but also a number of treats, including a variety of desserts, hand dipped ice cream with toppings, ice cream novelties, snacks, and non-alcoholic beverages while they visit with beloved Princess and the Frog characters Tiana and Naveen.

This new event will have an effect on regular park operations

This newest upcharge event is somewhat unique among its peers, as it will require he closure of a Magic Kingdom attraction in the middle of the day. While upcharge events related to the now former Main Street Electrical Parade and even Wishes have historically involved eating a meal somewhere or closing down a restaurant, this event will require the Liberty Square Riverboat attraction to close to regular park guests around 2:00 PM to make way for guests paying for the upcharge event. This attraction will then reopen two hours later after the conclusion of this event.

Though the Liberty Square Riverboat is far from the most popular attraction at the Magic Kingdom (it's usually walk on, even on the park's busiest days), the idea that Disney is willing to close off a specific attraction and only make it available only for higher paying guests for several hours during the day is a little concerning. Then again, maybe we shouldn't be all that surprised at this turn of events considering the current climate at Walt Disney World...