Now that the dust has settled on the 2022 edition of the D23 Expo, fans are certainly buzzing about the future of Disney parks. Happily Ever After is coming back to the Magic Kingdom, an Avengers ride is set for Disneyland, and Tiana's Bayou Adventure will open in 2024. However, many were left with more questions than answers after this year's D23 Expo, and rumors are swirling about what Disney left out of their presentation (and what some of those bizarre non-announcements could mean as well). 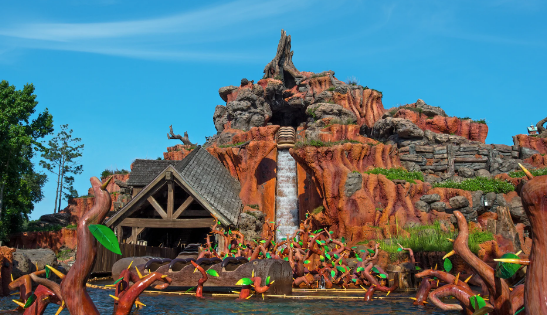 Many were expecting Disney to announce a closing date for Splash Mountain at this year's D23 Expo as part of their big unveiling of Tiana's Bayou Adventure. And even  though we did get a few new details about the new attraction, Disney didn't say anything about the closure of the still-standing Splash Mountain. However, though it wasn't announced at D23 Expo, it seems likely that this attraction will still close at some point this year, as Disney has confirmed that Tiana's Bayou Adventure will open in 2024, and Disney will need time to transform the former Splash Mountain into this bnew attraction.

2. The "Beyond Thunder Mountain" presentation was just market research

One of the most bizarre moments of this years D23 Expo came at the end of the Parks panel, where chairman Josh D'Amaro announced that there could be something "beyond Thunder Mountain", which has been a long-rumored expansion area at the Magic Kingdom.

Among the ideas floated were a land based on Coco, a recreation of the Casa Madrigal from Encanto, or even a land populated by villains. What was truly strange about this presentation was that Disney didn't concretely announce anything for this expansion, and these were only presented as "ideas" for the future of Magic Kingdom.

So why were they even mentioned at all? Well, it may have been to see how fans reacted to the ideas and gauge interest in real-time and on social media to the various ideas so that Disney could proceed to work on the more popular ones at a later date. Will these ideas ever happen at the Magic Kingdom? Maybe. But we wouldn't hold our breath.

3. TRON Lightcycle Run is being held back because Walt Disney World doesn't have anything for 2023

It's hard to believe that TRON Lightcycle Run has been under construction for five years, and while the attraction seems like it is close to being finished (it has been testing over the past few weeks during park hours at the Magic Kingdom), Disney surprised fans at the D23 Expo by announcing that this attraction would not be coming online until Spring 2023.

While at first glance it may seem strange that Disney isn't opening this presumably finished attraction for another six months (or more), rumors suggest that without any other "big" attractions opening next year, Disney needed a sizable draw to get guests back to the park after its 50th-anniversary celebration concludes next year, and TRON Lightcycle Run might just be the attraction to do that.

Though Disney did not confirm it at the D23 Expo, it seems likely that with TRON Lightcycle Run officially opening next year, that the long-closed Walt Disney World Railroad, which initially closed in 2018, will open alongside this new attraction in spring 2023. It seems strange that Disney did not confirm this opening, but hopefully those who have been missing riding the rails for the last five years will finally be able to ride this fan-favorite attraction once again next year.