Confirmed Changes Made To Revenge Of The Mummy From Soft Opening

UPDATE August 31 - The Revenge of the Mummy has soft opened at Universal Studios Florida and we now have confirmed changes and updates that have been made to this popular roller coaster including:

You can check out this video below of reopening day from Coaster Jens:

From every report we have read so far, fans are extremely impressed with the coaster with words such as "sensational, perfect, unbelievable" being used. So, all that is left to say is, enjoy the ride! Let us know your thoughts by leaving us a comment below or on our Facebook page.

UPDATE August 18 - After Team Member peviews for Revenge of the Mummy took place last week, we have been scouring the internet for news of the changes which are rumored to have been made during this extensive refurbishment. We know that Universal Team Members have been strictly instructed not to talk about their experience but inevitably information has leaked. However, we can not confirm officially any of the below points just yet:

It seems likely due to the length of the refurbishment that any parts of the track which needed replacing have been and we are expecting a very smooth and effects filled ride.

With Team Member testing having taken place and seemingly all finishing touches complete we are now ready and poised for a reopening at any time. We will keep you posted on our news and Facebook page.

UPDATE August 13 - Only this morning we reported the results from our recent poll where 86% of people think Revenge of the Mummy will reopen in time for Halloween Horror Nights and today the plastic covers have been taken off the windows and between 11:00AM to 5:00PM Universal held an exclusive preview for Team Members. Comments online from the lucky Team Members who got to ride today appear to be overwhelmingly positive which is great to hear.

We still await an official reopening date but expect this to be very soon. We will keep you posted on our news and Facebook page.

UPDATE August 13 - Based on the results from our current poll, Universal fans seem very confident that Revenge of the Mummy will reopen in time for Halloween Horrror Nights with 86% of people saying "yes" and only 14% saying "no".

We have heard a rumor online that Universal were trying to get the roller coaster open by August 15, although as this is only a couple of days away and there still hasn't been an official announcement we are sceptical. We will keep you updated on our news and Facebook page. If you haven't had your say yet, you can still vote below.

UPDATE August 10 - With rumors still flying online as to when The Revenge of the Mummy will reopen at Universal Studios Florida, the simple but frustrating answer is that we still don't know. However, we do know that Revenge of the Mummy Team Members have been seen in costume and are being retrained which gives us further hope that a reopening is in sight.

Some fans are speculating a reopening in time for the start of Halloween Horror Nights which will soon be upon us on September 2, but again this has not been confirmed or denied by Universal. We will keep you informed and will let you know further information as soon as it is announced. In the mean time let us know your thoughts on whether you think the Revenge of the Mummy will be open for Halloween Horror Nights by voting in our poll below.

UPDATE July 31 - Excitement has been running very high at Universal Studios Florida this week as finishing touches appear to being made to Revenge of the Mummy. We now have news that the extended queue ropes and shade umbrellas have been set up outside.

Extended queue ropes are set up at the entrance of Revenge of the Mummy, but plastic is still in the windows. pic.twitter.com/zuuxMcVihl

The rumor of an August 2, reopening looks like it could certainly be a possibility. We will update you with further news as soon as we have official confirmation.

UPDATE July 29 - While Revenge of the Mummy has been closed for refurbishment, the exit gift shop has been a Classic Monsters Tribute Store named 'A Tribute To The Creatures Of The Night' since the end of January. Inside Universal has posted a tweet showing that Sahara Traders is getting ready to return to being an exit gift shop with photo kiosks and a counter having been added. Imhotep has also returned home!

We are all waiting for a confirmed reopening date for Revenge of the Mummy at Universal Studios Florida and news that the ride's exit gift shop, Sahara Traders, is getting ready to reopen certainly shows that things are heading in the right direction. We will update you on the reopening date for this popular attraction as soon as it is announced.

Sahara Traders is getting ready to go back to being an exit shop for Revenge of the Mummy. A new counter and photo kiosks have been added. @UniversalORL pic.twitter.com/xt5COOZOJC

Imhotep even thought it was too damn hot out as he is back inside Sahara Traders. @UniversalORL pic.twitter.com/An5lUgQJPn 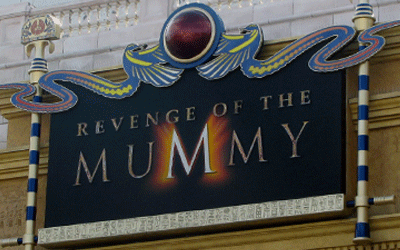