Here at Theme Park Tourist we have details about a massive new 1000+ acre resort which is planned for the US Midwest. The theme park within the resort has been billed as the world's first Eco Theme Park.

The new Eco Theme Park will only be one part of the resort which will also include a huge indoor water park and convention centre, an indoor Entertainment District (supposedly similar to Downtown Disney or Citiwalk but much larger), and an indoor facility.

The indoor facility will be called 'The Grand Atrium' and will serve as a gateway into the park. It will be an enormous building which will feature numerous indoor attractions that are designed to educate through entertainment including dark rides, exhibits, a wide format theater, as well as unique shopping and dining experiences. There appears to be great importance given to the attractions being both entertaining and educational. Also included in 'The Grand Atrium' will be a beautiful indoor butterfly garden.

The Grand Atrium is planned to open in the Fall of 2024 with the rest of the park due to open in Summer 2025. As of now these dates appear to be loose guidelines and have moved many times already due to COVID-19 over the last couple of years.

The theme park is billed as the first Eco Theme Park and each attraction will have a  “green planet” message. It will be split into a number of different themed lands with most situated around a central lake which is located just off the main street. Education will shine through and even the roller coasters will have an undertone of learning. So, it’s not a museum.  But it’s certainly not a Six Flags. It appears that it will be a blend of nature and education but with FUN at the heart of every attraction making this a very exciting and original prospect. We are guessing that numerous animals will be included in the park too.

The image below shows an artist's impression of one of the lands which will be included in the Eco Theme Park. As you can see it will be heavily themed with trees and greenery to absorb guests in the rustic ambience. The ride which is shown is a traditional wave swinger attraction but has been transformed to the parks theme to celebrate nature and the environment. 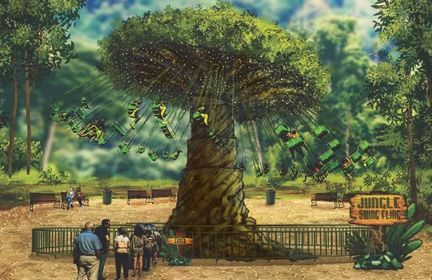 The following image appears to be of an attraction based on the Jackalope which is a mythical creature of Northern America. The Jackalope is described as being part Jack rabbit and part antelope hence the horns. It looks similar to a very popular ride we all know and love but with a legendary twist. 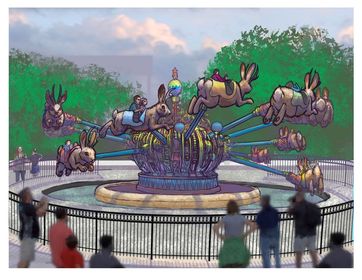 We also have this final image to share with you, giving an artist's impression of yet another one of the planned lands for the theme park. 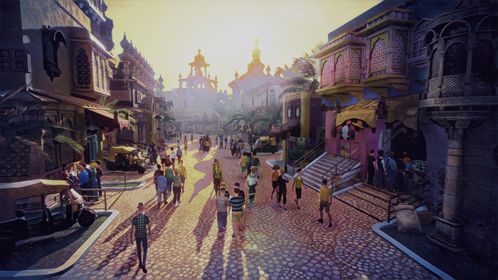 We are hoping to hear further details about this exciting new project in the coming weeks with more concept art and information outlining exactly where this new resort will be located and a more concrete idea of when we are likely to see it opening. Oh yes, and of course what this new Eco Theme Park and resort will be called.

We will inform you as soon as we hear any other updates on this new resort on our News and Facebook Page. Let us know your thoughts on this first Eco Theme Park and resort which is planned for the Midwest by leaving us a comment below or on our Facebook Page.