The Emperor roller coaster at SeaWorld San Diego, is another completed ride that was in testing as of March, but has been delayed to 2021. This new attraction reaches speeds of 60 miles per hour, and when it opens it will be the tallest and fastest floorless dive coaster in the state of California!

Late last year it was confirmed for the first time that Harmonious would be making its debut at Epcot sometime in spring 2020, with work progressing quickly around EPCOT's World Showcase Lagoon on infrastructure for this show. Of course, this nighttime show has been delayed significantly, likely until sometime next year.

Though we still don't have an opening target for EPCOT's new Harmonious nighttime spectacular, barges for this show will be out in World Showcase Lagoon at EPCOT during the daytime, as fountains to offer a special visual feature for guests. The first of these barges has already been installed, and you can see photos here.

Though Remy's Ratatouille Adventure was originally scheduled to open in an expanded France pavilion in Summer 2020  but it looks like now this new attraction will open sometime next year, with a date yet to be confirmed. Work on this attraction is all but complete, and Disney has been sharing inside looks from this new ride via its official TikTok channel.

Though we've seen delays announced for rides, restaurants, and full lands, LEGOLAND New York resort, which includes a whole theme park and hotel, delayed its grand opening a full year, and will now welcome its first guests in the spring of 2021. When open, this park will have over 50 rides, shows & attractions, including the Lego Factory Adventure, a one-of-a-kind trackless ride that shrinks guests down to the size of a minifigure! 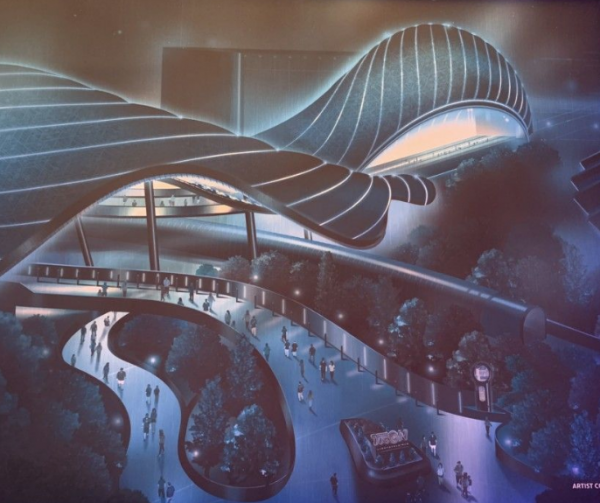 Though construction on Tron Lightcycle/ Run has been accelerating recently in anticipation of a fall 2021 debut in time for Walt Disney World's 50th anniversary, a recent rumor posted on the WDWMagic forums seems to indicate that all of this progress is about to grind to a halt.

Right now it looks like the current plan is for construction to continue through the end of the year, with workers focusing on building the exterior canopies of the attraction and then shut down for awhile before picking up again next year, pushing the debut of this attraction to 2022.

As you might expect, budget cuts are one of the leading culprits behind this latest development, as Disney is looking to cut costs everywhere they can as travel during the COVID-19 Pandemic remains depressed. In addition, physical spacing for workers has reduced the numbers of people on site, which has also led to slowdowns in construction.

19. Guardians of the Galaxy: Cosmic Rewind

Like Tron Lightcycle Power Run, Epcot's Guardians of the Galaxy-inspired attraction is very far along in development, with construction on this first-of-its kind roller coaster entering its final phases in preparation for its originally expected debut next year. However, according to several sources this project has also been delayed until 2022 as well.  You can check out a small section of ride-through footage and additional details about this project here.