Even More Sneak Peeks at Star Wars: Rise of the Resistance Released

We're in the final countdown to the grand opening of Star Wars: Rise of the Resistance, which will be opening in less than two weeks at Disney's Hollywood Studios. And though this may or may not be the final piece of Star Wars: Galaxy's Edge, for now, expectations are high for this new attraction, both as the completion of the current iteration of this land, and also one of the most technologically impressive attractions ever built.

As you might expect, Disney is going all out to promote the opening of this new attraction, and has released several new sneak peeks to get fans excited for this new ride, opening on December 5th in Disney’s Hollywood Studios at Walt Disney World Resort and in Disneyland Park at Disneyland Resort on January 17th.

A famous X-Wing can be found in the queue 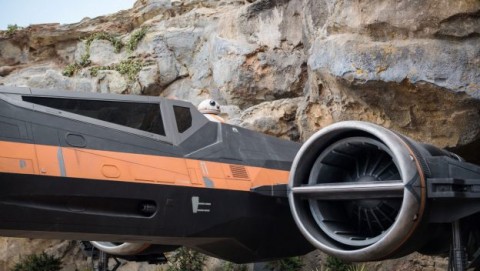 The queue for Millennium Falcon: Smuggler's Run is one of the best at Walt Disney World as it allows you to visit some iconic parts of the most infamous ship in the galaxy. However, it looks like Star Wars: Rise of the Resistance is going to have a pretty impressive queue as well, with Disney recently sharing a photo of Poe Dameron's X-Wing in the queue.

Though not pictured, it has also been confirmed that guests waiting to experience this attraction will also encounter BB-8 in the queue as well!

Though it is not airing in central Florida, a new ad has been released in California promoting the Disneyland opening of this attraction in January. And as you can see in the video above, this new commercial features several  moments from the ride, including the audio-animatronic Kylo Ren armed with his iconic red lightsaber, and yet another look at the fleet of audio-animatronic stormtroopers riders will encounter during the opening moments of the attraction.

The video also shows off the ride's trackless motion base vehicle moving under a pair of giant AT-ATs and through a narrow corridor where Kylo Ren's lightsaber suddenly pierces through the ceiling.