Though Disney confirmed some details earlier this week about Avengers Campus (formerly just known as Marvel Land), during last week's D23 Expo, in the midst of confirming new attractions, refurbishments, lands, and more for Epcot, they also gave us some more information about what to expect from this new area at Disney California Adventure, even confirming a phase two before phase one even opens!

Though technically the first attraction to be featured in this land is Guardians of the Galaxy: Mission Breakout, when this land opens next year it will open with another new attraction based on Spider-Man. Though Disney didn't give a name, we now know that guests will be able to visit the Worldwide Engineering Brigade, also known as “WEB” which will give guests the opportunity to experience what it’s like to have web-slinging superpowers like Spider-Man as they take on a mission to take out Spider-Bots that have run amok during a test drive of the “Web Slinger” vehicle, which gives guests the ability to sling webs just like Spider-Man.

This attraction certainly looks like fun, and even though Disney and Sony are not continuing to produce Spider-Man/Avengers films together, at least this iconic hero will still be represented at this upcoming new land. 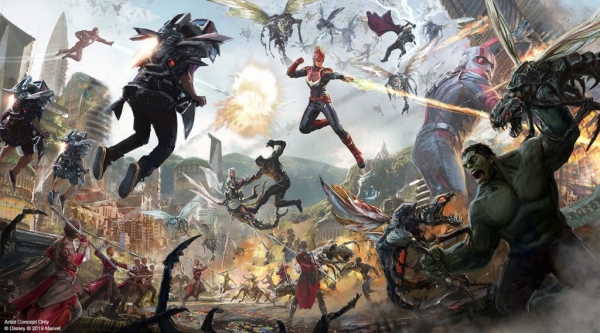 Though the Spider-Man attraction sounds interesting, it looks like we're going to have to wait awhile for this new land's signature attraction, which will be an as-yet untitled new E-Ticket attraction that will be a part of a now-confirmed Phase 2 of this land. This new attraction will see guests flying alongside heroes like the Black Panther, Captain Marvel, Hulk and more as they battle against Marvel villains in the iconic Quinjet. Though Disney said that this attraction will be open with the next phase of the Avengers Campus, they didn't provide any kind of timetable about when this unnamed attraction might be open.