This week was a big one for news at Disneyland, with more details about Star Wars: Galaxy's Edge revealed, including information about how Disney will remove guests who overstay their welcome and a brand new annual pass type that is truly the first of its kind. However, at Walt Disney World, there has been some news too, with

Outside Walt Disney World, Universal Orlando Resort reveals a massive new animatronic that will be featured in Hagrid's Magical Motorbike Adventure as well as a new free parking with purchase deal.

The Disney Skyway gondola system has been in testing for several months at Walt Disney World, and though the gondolas were all wrapped up in plastic, this week Disney unwrapped 55 stunning Disney-themed gondolas for special test runs. Featuring characters from Star Wars, Marvel, Disney animation and of course Disney parks, these gondolas look amazing, and though there is no firm opening date yet, Disney has said that guests will be able to take a ride sometime this fall. You can check out the video above for a look at some of the exciting designs!

Back in 2017 during the D23 Expo Disney surprised guests by announcing a new space-themed restaurant that would be constructed in Future World where would have special "windows" that simulate views of the galaxy as diners “travel high above the earth” during their meal. And now we know that construction on this project is moving along speedily as Disney has announced a late 2019 opening for this upcoming restaurant!

3.  Tickets now on sale for the NBA Experience 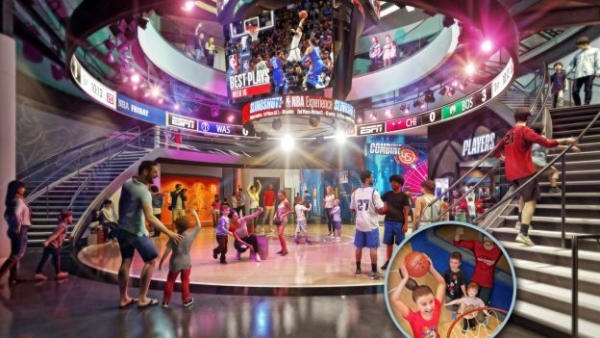 Tickets are now on sale for the NBA Experience, which will open this summer on August 12, 2019, just before the opening of Star Wars: Galaxy's Edge at Disney's Hollywood Studios. A single day admission will cost $34 (plus tax) for adults (ages 10 and older), and $29 (plus tax) for children (ages 3-9). Tickets can be purchased on the Walt Disney World website here.

When guests enter the NBA Experience, they will feel as if they’re walking through the players’ tunnel at an NBA or WNBA arena and will then be able to check out a variety of experiences themed to the world of basketball, which you can read more about here.