Though the finishing touches are still being put on Star Wars: Galaxy's Edge at Disney's Hollywood Studios in advance of its August debut, guests are still flocking to Toy Story Land at this park, which opened just under a year ago. And though this new land is already in rough shape, earlier this week Disney announced that this new land would be expanding soon with a brand new restaurant. But it's probably not the one you are thinking of... 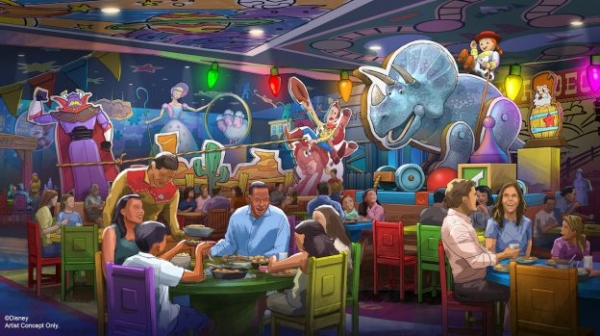 One of the most puzzling aspects of Toy Story Land that many guests noted when this land opened (other than its lack of shade) was the absence of a restaurant beyond the Woody's Lunch Box snack stop. However, it looks like Disney will be remedying this issue soon by introducing a brand-new table-service restaurant in this location. However, if you were hoping that the fan-favorite in-film Pizza Planet restaurant would be coming to Toy Story Land, sadly, you'd be mistaken.

Instead, this new restaurant will be themed to resemble a new "rodeo" play area assembled with cardboard boxes cut and taped together, this new location will feature multiple dining rooms and plenty of familiar toy characters that have been brought together to create a fun, colorful mashup-atmosphere that only a child could create. This immersive restaurant will surround guests with a kaleidoscope of toys, games, and playsets that will certainly please fans of the long-running Toy Story franchise. 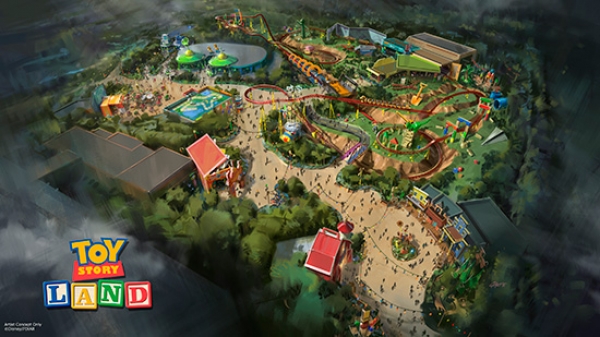 This new dining location will be built in the front of Toy Story Land, near the giant Woody Toy Story Land entrance sign. Guests who remember the original 2015 concept art (which you can revisit above) may notice a grey building behind a colorful facade in the lower right hand part of the art, and we believe that is likely where the new restaurant is going to go (there's no way to know if that is a restaurant in the original concept art).