Though we were expecting a late fall opening for Star Wars: Galaxy's Edge at Disney's Hollywood Studios earlier this month it was confirmed that construction on this land is actually ahead of schedule, with an opening date now set for August 29, 2019. And though Disney is only opening one attraction with this land (Star Wars: Rise of the Resistance will be opening at an undisclosed later date), they are still anticipating a massive influx of guests to show up to check out this new land when it opens in just a few months, and have begun making room for what will certainly be a massive line to get in to Star Wars: Galaxy's Edge

Transforming Grand Avenue into a queue 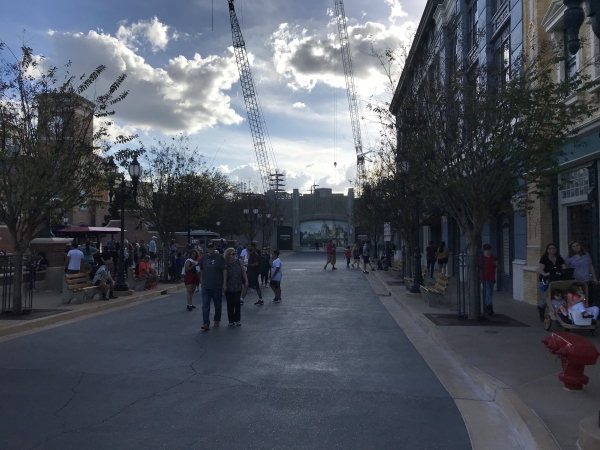 Guests who experienced Pandora: The World of Avatar during its opening weeks will likely recall when Disney had to use the bridge to this land from Discovery Island as a holding area for guests waiting to get into the popular land when it was at capacity. And while this bridge was a natural area for guests to wait just outside the edge of Pandora, Disney's Hollywood Studios doesn't have a super easy structure like this that is out of the way enough for a massive queue to sit without disrupting other areas of the park. However, Disney has begun work on a solution to this issue.

Grand Avenue, the pop up land that replaced Muppets Courtyard and surrounds the singular MuppetVision 3D attraction will become one of the main entry points for guests wanting to venture into Star Wars Galaxy's Edge, and work is now underway on a number of preparations that will make Grand Avenue suitable for giant throngs of people to wait to get into Star Wars: Galaxy's Edge

As we noticed a few weeks ago, the area across from Star Tours where the former speeder bike photo op was has been walled off, and much of the queue for the character meet and greet in this area has also been removed. Behind the walls, Disney is widening the paved areas of this land, and making it suitable as a holding pen for guests who are waiting to get into Star Wars: Galaxy's Edge.