It's no secret that Walt Disney World has been going through some massive changes over the last five years. However, one project that hasn't been getting as much attention is the transformation of the park entrances, which Disney has been trying to make more pleasant and welcoming for guests. And though certain features (like security checkpoints) are a necessary part of the modern Walt Disney World experience, Disney has announced a plan to clean up some of the more cluttering elements of these entrance areas.

Magic Kingdom's "Disney's Walk Around the World" bricks to be removed 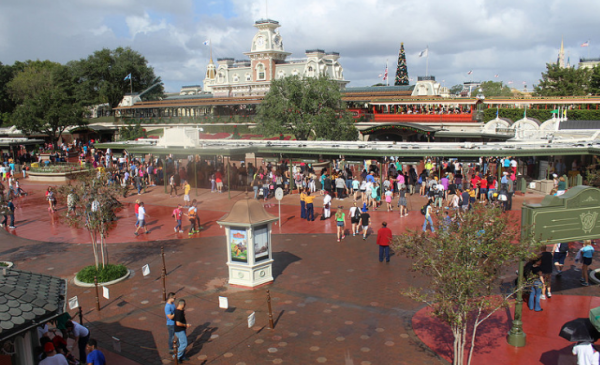 “Disney’s Walk Around the World” program was introduced in the 1990s during the Disney Decade as a way to get guests excited about leaving a mark on Walt Disney World with special paver stones that could be customized for $85 and then displayed around the Magic Kingdom. If you've ever looked down while walking around the Magic Kingdom entrance or the Disney Ticket and Transportation Center, you've probably seen many of the "Disney's Walk Around the World" pavement stones, which were committed to be on display until 2011.
However, though these bricks have been in place for 20+ years, Disney has announced that they are being removed in the very near future, and will all be totally gone before the end of the summer. And since the bricks were not designed to be removed individually, they will not be available for guests take home. Instead, anyone who sponsored a brick may purchase a commemorative version between now and Aug. 31, 2019 for a discounted price by visiting Guest Relations, verifying their information, and receiving a special voucher that allows them to get a special recreation for only $10. Guests who cannot physically get to this location can also email [email protected] or call 407-828-2701 to verify their brick information and get their voucher.