Last month Universal Orlando Resort confirmed the new Hagrid’s Magical Creatures Motorbike Adventure attraction, which will bring guests flying on Hagrid's motorbike beyond the grounds of Hogwarts castle on a roller coaster ride, where they’ll see “some of the Wizarding World’s rarest magical creatures.” And though the announcement revealed that ride will have unique coaster trains that recall the look of a motorbike and its sidecar, not much else was revealed at the time. However, in the weeks since Universal has first announced this attraction, some interesting new details have been revealed about what guests can experience when Hagrid’s Magical Creatures Motorbike Adventure opens on June 13th.

Hagrid’s Magical Creatures Motorbike Adventure will be a "family friendly" coaster, but will still feature plenty of thrills 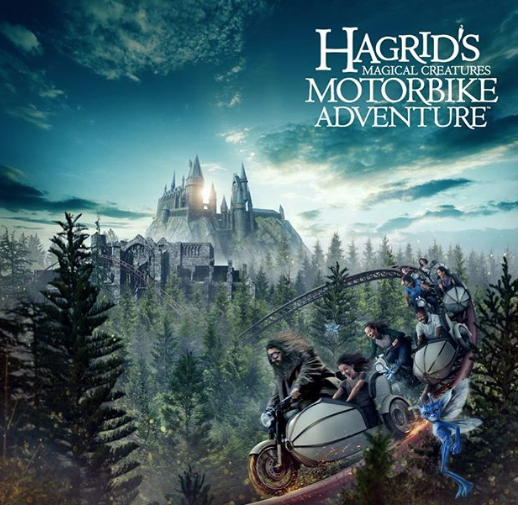 Though some fans were initially disappointed to hear that the former Dragon Challenge attraction would be replaced by a "family-firnedly" ride, this new roller coaster will still pack plenty of thrills, as Universal has confirmed that  Hagrid’s Magical Creatures Motorbike Adventure will have a top speed of 50 MPH, and will also include sections where the ride vehicle will twist, turn, and even move backwards.

And of course, there will be plenty of interesting (and potentially scary!) creatures along the way to thrill guests experiencing this new roller coaster, including centaurs, Cornish Pixies, and the iconic Fluffy the three-headed-dog. Riders will also face obstacles like becoming entangled in the Devil's Snare during this thrilling new ride as well. Universal has also teased that a new creature that was not featured in the films will be debuting as part of this upcoming attraction as well!

Though its true that this won't be a hardcore roller coaster like Dragon Challenge, it looks like this new attraction will still feature plenty of thrills, but will have a height restriction that will keep it accessible to younger Harry Potter fans in a way that the former Dragon Challenge attraction was not.