Shanghai Disneyland has only been open since 2016, but already this park is announcing its second major expansion, confirming this week that the park will be adding an eighth themed land to its lineup: the world of Zootopia! And though this new film-inspired land has been rumored to be in development since last year, Disney has also now confirmed not only that this land is indeed coming soon to Shanghai Disneyland, but also some exciting new details about this upcoming new land, including a hint about the future of Zootopia that might just involve Walt Disney World...

There will be plenty to do in Shanghai's newest land 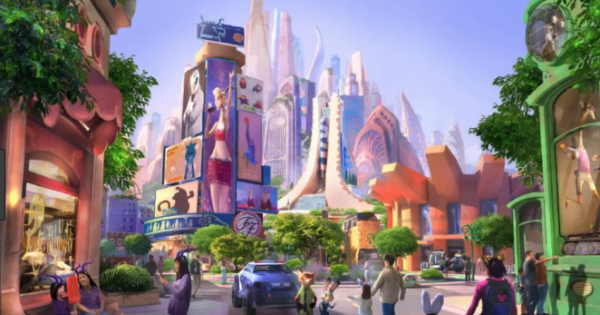 According to a statement released by Disney, this new themed land will invite guests to fully immerse themselves in the metropolis of Zootopia, where anyone can be anything. This new land will have brand-new entertainment, merchandise, food and beverage offerings, and of course, most excitingly, this land will feature a new major attraction. This new ride is being described as an experience that will seamlessly blend Disney storytelling and state-of-the-art technology to bring the world of Zootopia and its characters to life – including Judy Hopps and Nick Wilde. Though not confirmed, this certainly sounds like a dark ride, and given the family-friendliness of the Zootopia IP, we'd guess something trackless like Ratatouille or Pooh's Hunny Hunt will be powering this new attraction.

Though only one piece of concept art was released alongside this new land announcement, it looks like Disney is definitely going to be recreating the look of Zootopia from the film, and rumors seem to indicate that guests will be able to explore the different "neighborhoods" seen in the movie, including Sahara Square, Tundratown, Little Rodentia, Rainforest District, and Downtown.

Construction will start this year

Disney will be wasting no time getting started on the Zootopia project at Shanghai Disneyland, and will begin construction on this new expansion some time this year. While no official opening target has been released, current speculation is that Disney is hoping to have Zootopia ready for guests to explore for Shanghai Disneyland's 5th anniversary in 2021. This is a bit of a tight construction timeline for such an immersive land, but Disney has dealt with some pretty harsh deadlines when it comes to Shanghai Disneyland before, so it's certainly not an out of the question opening target for this new area and would coincide nicely with an important anniversary.