Though the big news out of Disney's Hollywood Studios in 2018 was the June 30th opening of Toy Story Land, as the year draws to a close there are some other changes are on the horizon for this park that visitors should know about. From the opening of a new show to an exciting new holiday overlay, here's everything that will be happening soon at Disney's Hollywood Studios:

1. Vampirina set to come to the Animation Courtyard next month 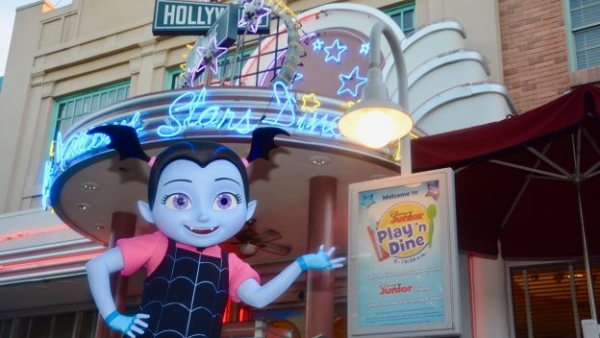 Last month Jake from Jake and the Neverland Pirates sailed away for good, and though this character's spot is currently empty, it won't stay that way for long as new Disney Junior character Vampirina is due to stop by in November to begin meeting guests regularly in this area of the park. Vampirina can already be found at the Disney Junior Play n' Dine experience at this park (as well at Mickey's Not-So-Scary Halloween Party at the Magic Kingdom) but next month will finally bring this character out from upcharge experiences and into a space where regular park guests can meet her.

Disney announced earlier this year that a new show called Disney Junior Dance Party! will be coming to Disney's Hollywood Studios. This character-based show will feature plenty of familiar faces from popular TV shows like "Mickey and the Roadster Racers," "Doc McStuffins," "The Lion Guard" and Disney Junior's newest hit series "Vampirina." This new show is being billed as a musically infused, interactive concert, hosted by new characters Finn Fiesta and Deejay, who involve guests in all the fun.
Though this new show was originally supposed to open this fall, it looks like there has been a small delay, with Disney confirming that this new show will now open just in time for Christmas on December 22, 2018.

It might not be the Osbourne Family Spectacle of Dancing Lights, but Disney has confirmed that the brand new Toy Story Land will be getting "seasonal enhancements" as part of a new overlay this winter.

You can check out an early look at some of these enhancements in the video above.

The Big Debate RESULTS - What is YOUR Favorite Theme Park Attraction In The World?