This month, Walt Disney World preps for a potential new hotel near the Magic Kingdom, Disney's Contemporary Resort abruptly ends a guest activity that has been available for more than 20 years, plus character dining comes to Disney's Wilderness Resort and Disney's Caribbean Beach Resort prepares to reopen a fan-favorite dining location in just a few weeks!

Earlier this year rumors swirled about a brand new Magic Kingdom hotel project, which is reportedly deep in development and could potentially be built overtop the ruins of River Country. And though it hasn't been said explicitly, it looks like some changes related to this project could be hitting the Fort Wilderness Resort and Campground in the near future.

First up, it looks like the popular Mickey's Backyard BBQ will be closing later this year, according to WDWMagic. And interestingly, some have also reported that the Hoop Dee Doo Musical Revue may also close forever later this year due to this project as well, potentially later this year or early next year.

Though this project is still unconfirmed, Disney has been quietly demolishing and draining the River Country site, and with the confirmed closure of Mickey's Backyard BBQ and rumored closure of the Hoop Dee Doo Musical Revue, it seems safe to assume something is happening here, and we could here more about this project as soon as next year during the D23 Expo. 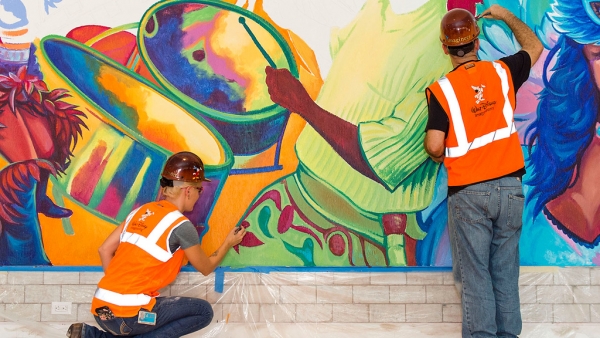 Though it has been under refurbishment for quite some time, it looks like Old Port Royale at Disney’s Caribbean Beach Resort will finally reopen this fall, and will feature a newly expanded Centertown Market. Designed as an indoor street market-style quick service restaurant, the reimagined Centertown Market will be full of authentic colors and details inspired by the Caribbean, with some beautiful murals, like the one seen above.

In addition to the reopening of the Centertown Market dining location, this fall will also see the opening of Sebastian's Bistro, a lightly Little Mermaid-themed restaurant that will offer a menu that blends Latin and Caribbean flavors, and will feature an interior design that reflects a tropical beachfront home.