As the busy summer travel season is getting ready to get started it's time once again to take a look at some of the big projects Disney has in the works for the next five years.

For our springtime 2018 update, we take a look at some of the finishing touches being put on Toy Story Land, plus some construction updates from the Magic Kingdom and Epcot!

A brand new roller coaster is coming to Disney's Hollywood Studios that will form the backbone of the all-new Toy Story Land, now confirmed to be opening on June 30, 2018. Described as a family-friendly roller coaster (so expect low speeds and small height restrictions), the Slinky Dog Roller Coaster will see guests boarding vehicles shaped like Slinky Dog and then zooming around a winding track, passing through tunnels and other landmarks around Toy Story Land.

This attraction is fully complete (along with the rest of Toy Story Land), and Disney recently shared the sneak peek video above that includes on-ride footage of the attraction.

The second new attraction for Toy Story Land is a spinning flat ride named Alien Swirling Saucers (don't try and abbreviate that), which will be inspired specifically by the first Toy Story film and will be designed to look like a play set found in Andy’s room.

Like Slinky Dog Dash, construction on this attraction has been completed, and Alien Swirling Saucers will open with this new land as a tier 1 FastPass+ attraction on June 30, 2018. 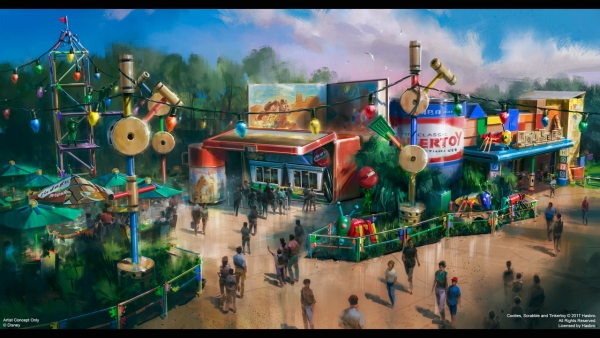 Woody's Lunch Box is a new quick service stop is will resemble a lunch box (complete with Tupperware) and thermos that has been transformed into a walk-up window that will serve both quick service meals and old-fashioned soda floats. Much like the Harmabe Marketplace at Disney's Animal Kingdom, this new location will not have an inside dining room, and will instead have a small amount of outdoor seating adjacent to the walkup window. You can check out the menu for this new location here.