Though you might not immediately associate Disney’s Animal Kingdom with character experiences, this park has always had a surprisingly robust amount of character experiences and attractions. Even after the closure of Camp-Minnie-Mickey in 2014, guests at this park could still meet Mickey, Minnie, Pocahontas, Rafiki, Tarzan, King Louis, Baloo, Flik, and Dug reliably around the park, which has been great for Disney fans who enjoy meeting and taking pictures with these classic Disney characters.

And if you count yourself among these character fans, then you might want to plan to spend some extra time at Disney’s Animal Kingdom on your next visit to Walt Disney World, as some interesting new details have been revealed about this park’s newest character attraction: 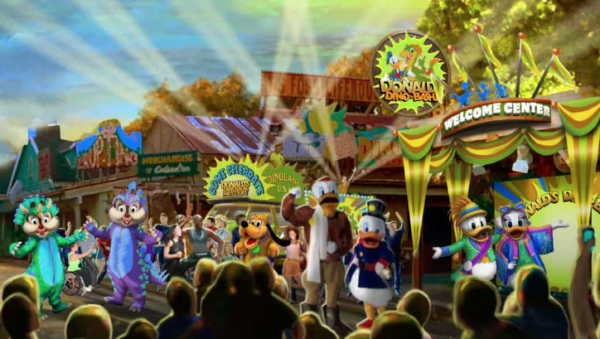 Earlier this year Disney announced that the new Donald’s Dino-Bash character attraction would officially debut at Disney’s Animal Kingdom on May 25, 2018. However, while this new attraction may have initially sounded like another character dance party the likes of which have come and gone at Disney’s Hollywood Studios and the Magic Kingdom off and on for the past several years, Disney sounds like they are doing some more interesting things with this new attraction.

First of all, there will be a small backstory, which will tie the land to the surrounding DinoLand USA area.  Speaking with the Orlando Sentinel, Mark Renfrow, show director with Disney Parks Live Entertainment, said that the new attraction is a celebration of Donald Duck discovering that birds are related to dinosaurs, and throwing a big party, which of course means he will be inviting all of his friends. And apparently, Donald is quite popular. 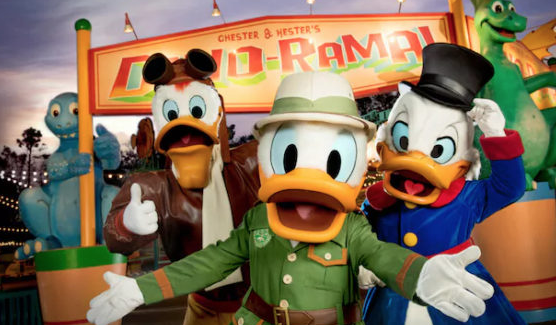 According to the same article, this new attraction will have a whopping 8 different character stations where guests can interact with not only standard characters like Donald Duck, Chip and Dale, and Pluto, but also more rare characters like Scrooge McDuck and LaunchPad McQuack. Though the full character roster has yet to be released, this is certainly a higher number than we expected, and makes this new attraction the biggest character meet and greet area at Walt Disney World, doubling the characters from the Princess Fairytale Hall at the Magic Kingdom.