The Magic Kingdom is Changing in Some BIG Ways...

Last week’s D23 Expo certainly was jam-packed with announcements, and while a lot of time during the Disney Parks and Resorts Panel was spent on the reinvention of Epcot, several announcements were made about other parks during this presentation as well, including the Magic Kingdom. Though Walt Disney World’s flagship park continues to make big attendance gains from year to year, Disney is hoping to draw even more guests to this park in the near future with some very interesting additions to this park before the resort's 50th anniversary in 2021. Here’s everything fans of this park will be able to look forward to until then…

1 Tomorrowland gets a Tron makeover

Though it has been rumored for a few months, last week we finally got confirmation that Disney is indeed bringing a duplicate of Shanghai Disneyland’s Tron Lightcycle Power Run attraction to Tomorrowland at the Magic Kingdom. This attraction, which allows guests to board a train of two-wheeled Lightcycles and go on a high-speed adventure through Tron’s high-tech universe, has been one of the most popular attractions at Shanghai Disneyland, and certainly is a sensible addition to the Magic Kingdom that should help draw thrill seekers and sci-fi fans to this park. You can check out a ride through of the version in Shanghai (which is supposed to be virtually identical to the upcoming Magic Kingdom version) here

However, in an interesting twist, it looks like rumors that predicted the destruction of the Tomorrowland Speedway to make way for this attraction were premature, as concept art shows Tron Lightcycle Power Run being built in an unused area next to Space Mountain, with a re-worked (and possibly re-routed) Tomorrowland Speedway in the foreground. Interestingly, it looks like changes may also be in store for some of the Magic Kingdom’s transportation options as well, as concept art shows the Magic Kingdom railroad going through the Tron building and the Tomorrowland Peoplemover being upgraded and possibly re-routed as well. Though the addition of the Tron Lightcycle Power Run is certainly exciting by itself, it looks like this addition will continue the Magic Kingdom’s quiet transformation of Tomorrowland with subtle improvements to other areas of this land. 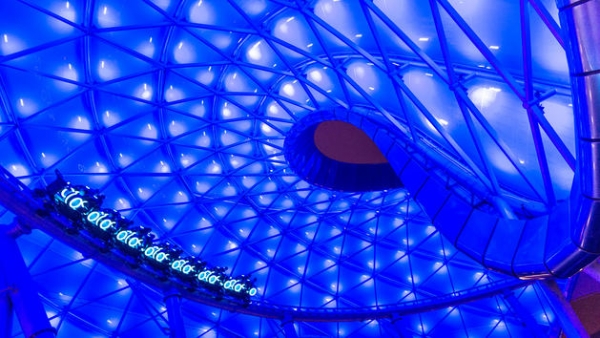 While we don’t know when construction will begin (or perhaps more importantly, when this new attraction will open) we’d imagine that Disney will break ground on this project in the next year, and will announce an opening date sometime in the next 18 months.

The addition of the Tron Lightcycle Power Run is certainly exciting, but Disney surprised fans at the recent D23 Expo by announcing another project in a completely different area of the park…

Is the tron coaster the same ride system as the motorbike coaster at flamingo land in the uk? It looks the same