Star Wars Land Will Be Open in Two Years. Here's Why You Should be Excited

Though it has been nearly two years since Star Wars Land  was first confirmed to be coming to Disney’s Hollywood Studios, there hasn’t been a whole lot in the way of official updates on this land since then. However, eagle-eyed guests who visit this park may have noticed that construction in recent weeks has really accelerated in recent weeks, with vertical construction now visible from guest areas.

With this development in mind, we figured now might be a good time take a quick look back at absolutely everything that has been confirmed so far for Star Wars Land 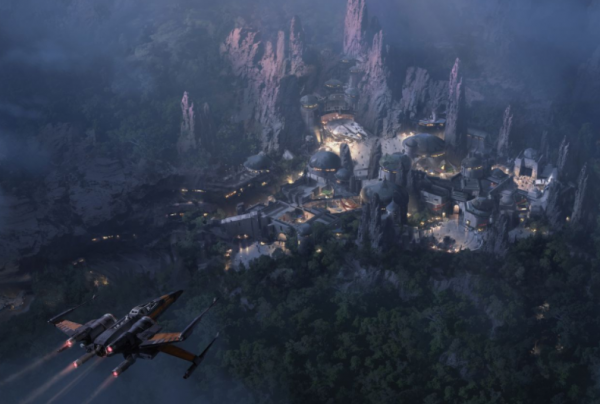 Historically, Disney has shied away from setting opening date targets for big projects, often waiting months or years after construction has gotten underway to estimate opening dates. However, for Star Wars Land Disney has broken with tradition and has announced thatthis ambitious new land at Disney’s Hollywood Studios (and at Disneyland) will welcome its first guests in 2019.

And while some may express some skepticism at Disney's ability to meet this target opening date (after all, vertical construction really just got started at Disney’s Hollywood Studios), Disney has a pretty big incentive to get this done quickly. Attendance is falling at Walt Disney World (as well as at other Orlando-area parks) and forecasters saying things might get worse before they get better, thanks to a continued slump in international visitors. However, Star Wars Land could change all that. We saw several years ago how The Wizarding World of Harry Potter gave Universal Orlando Resort its biggest boost ever, and there’s no reason to believe that Star Wars Land won’t have a similar effect.

However, even though comparisons to the Wizarding World of Harry Potter are inevitable (we'll probably be comparing attractions to Universal Orlando Resort's biggest success for decades to come), it seems like Disney will actually be taking inspiration for Star Wars Land from another new area that is also under construction at the resort...

2. The key word (again) will be immersion

Even though it is not open yet, Disney has confirmed that it will be trying something new with the upcoming Pandora - The World of Avatar land: total immersion. The goal is for guests to feel a connection to this world that goes beyond leaving their cares behind in Fantasyland or recalling the Wild West in Frontierland. For the first time in a Disney park, Cast Members in this land will completely ignore the rest of the park, interacting with guests as if they were travelers visiting a new world. Shops will sell "cultural artifacts" instead of souvenirs. Restaurants will serve "local" food, straight from Pandora. Every single inch of this land has been designed serve the story dreamed up by Walt Disney Imagineering and Lightstorm Entertainment, and the goal will be for guests to feel as though they are a part of the story of Avatar.

Like Pandora - The World of Avatar, Star Wars Land will also be designed form the ground up to transport guests to a "remote outpost planet", where Cast Members will respond to them as though they are a galactic traveller. This is of course a huge departure for Disney's Hollywood Studios in particular, as this park was previously dedicated to the art of making movies, not the actual world of the movies themselves. But with guest demand for this new style of attraction at an all-time high, Disney has really no choice but to invest in making a world that feels "real" to guests, and that's exactly what we'll be getting with Star Wars Land when it opens in two years.

I just can't believe it will open in 2019. 2020, maybe. But if we go by Pandora's timeline from announcement to opening, I wouldn't expect it until 2021catvthe earliest.

can't wait for star wars land. very excited for it at Disneyland been keeping my eye on construction there via Big Thunder Mountain Railroad.

As a huge fan of both Disney and Star Wars, I'm really excited to see what Disney does with this! Are we sure Disney is going with the timeline of the newer movies and the First Order?