2017 is Going to be a HUGE Year for Universal Orlando Resort. Here's Why

While we've talked a lot about Walt Disney World in the past year (the resort did open nearly two dozen attractions in 2016, which is kind of amazing when you think about it), it looks like 2017 is going to be a little slow at the theme park giant, with only four attractions slated to open at the resort in the next 12 months. However, down the street at Universal Orlando Resort, the situation is a little bit different.

While 2016 brought the opening of Skull Island: Reign of Kong and the re-launch of The Incredible Hulk Coaster to Universal Orlando Resort, 2017 looks like it is going to be a even bigger for Central Florida's second biggest resort, with a new ride opening at Universal Studios Florida, and of course the opening of a brand new water park. But first, let's take a look at an interesting new rumor that popped up just a few days ago about a new attraction that could be coming to Islands of Adventure in the very near future...

1.Rumored: A new Harry Potter projection show is coming to Islands of Adventure in early 2017

Earlier this year Universal Orlando Resort partnered with a projection mapping company for an unspecified project that many assumed to be Halloween Horror Nights-related. However, late last week Screamscape posted a rumor that Universal was working on a projection-style nighttime spectacular (similar to Walt Disney World's Once Upon a Time castle projection show) that will be performed nightly at The Wizarding World of Harry Potter – Hogsmeade.

According to their sources, this new show will look a lot like the one performed during the opening ceremony of The Wizarding World of Harry Potter in Hollywood (which you can watch above), but of course on a grander scale befitting a nightly spectacular. Perhaps even there will be a live show component (similar to the Death Eaters Attack show that was performed earlier this year at Universal Studios Japan) to this new show as well! 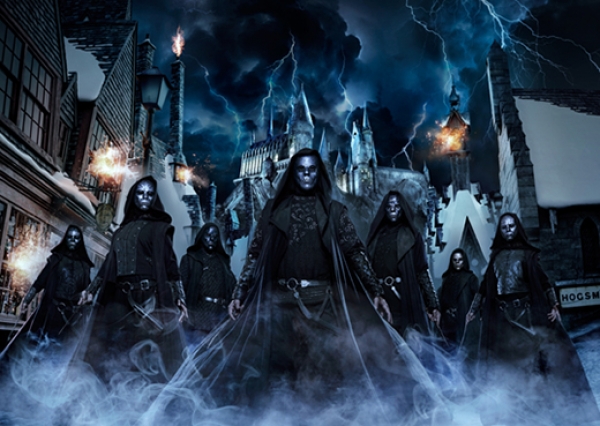 While there's much we don't know, this rumored new show is said to be deep in development. And if this new show does indeed come to Islands of Adventure in early 2017 (as rumored) it would be a definite boon for this park, which of course does not have its own nightly spectacular and often closes several hours earlier than its sister park, even in the busy summer season.

While nothing has been confirmed yet, Universal’s annual Celebration of Harry Potter event is coming up in just a few weeks, and it seems very likely that Universal will use this big event as an excuse to announce the existence of this rumored show, and potentially even preview it as well.

However, even though this project is still in development and unconfirmed, there’s another highly-anticipated  project that Universal is currently putting the finishing touches on...