We all know that safety for guests is paramount at Walt Disney World. However, this becomes even more important during severe weather, when the resort goes into overdrive making sure to keep guests secure during potentially catastrophic conditions.

We recently found ourselves at Disney’s Caribbean Beach Resort while Hurricane Matthew was approaching Florida's east coast and got an up-close look at exactly what happens when the threat of a Category 4 hurricane is upon Walt Disney World, and it was definitely an enlightening experience! Here's everything we learned during our recent stay at the resort...

1. The tie-down happens swiftly and efficiently 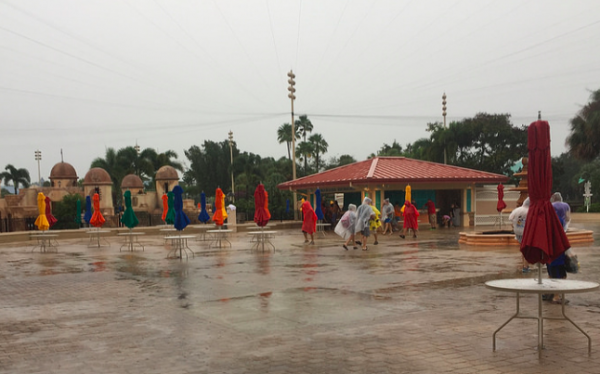 You might already know all about the tie-down process, where Disney Cast Members prepare for a storm by removing lose objects around the resort and tying down anything that could become airborne in the event of high speed tropical-force winds. However, though you might have heard about theme park tie-down, seeing this practice in action gives you a whole new respect for what the dedicated Cast Members at Walt Disney World do to get the resort ready for an incoming storm.

We arrived at Disney’s Caribbean Beach Resort around 3:00PM on Thursday October 6, (several hours before the storm was forecasted to hit) and at that time the outdoor pool bar was open, guests were playing in the pool, and there didn’t seem to be much happening around the Old Port Royale common area at the resort. However, after we checked in, we walked around this same area just two hours later around 5:00PM and found the bar boarded up, chairs folded and tied together, and trashcans lined up against the wall and lashed together with zip ties. 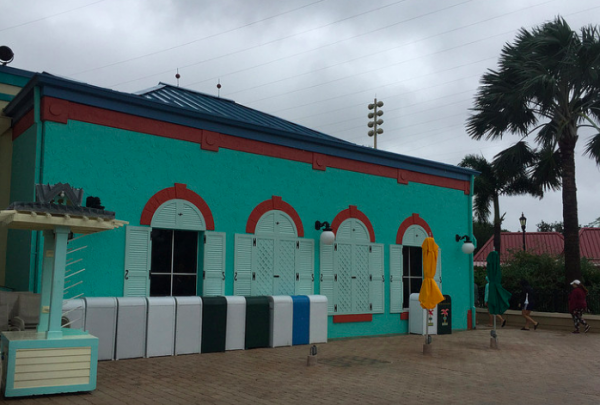 It is amazing how much of the resort was secured in just a few short hours, and though Central Florida didn’t get hit with the high winds that were in the original forecast for Hurricane Matthew (thanks to a very fortunate last minute shift in the storm’s path), Cast Members were definitely preparing for the worst, and got this hotel secure with astonishing speed and efficiency.

2. You'll know when you need to stay inside 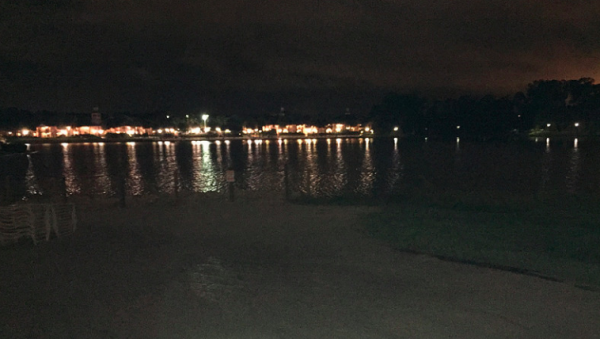 Just because the storm didn’t hit with the force initially predicted, that doesn’t mean that there were no dangerous periods. However, guests at Disney's Caribbean Beach Resort were kept in the loop with regular phone messages about when common areas were shutting down for safety reasons, and advisories about guests staying in their rooms.

Fortunately, because of the aforementioned change in forecast, guests didn't have to hunker down in their rooms very long, but even though the weather improved much faster than was originally anticipated, Walt Disney World’s theme parks remained closed for the entirety of the day on Friday, October 7, 2016. However, that doesn’t mean that there wasn’t anything to do around the resort...

Just once. My wife and I were down in Disney for our Honeymoon in 2010. Midway Mania was a new ride then, and we decided despite the long wait to jump on. When we got on the ride, it was a clear, perfect day. 2 hours later, we're what we think is getting close to the front of the line when suddenly, the line starts moving much quicker, and it's because we were being moved off the ride. Not sure what, something had happened (we thought we smelled some smoke), and the ride was being evacuated.

We were funneled right into one of the nastiest storms I've ever seen (and being from NJ, I've seen some nasty ones). People were crowded so tight in the stores, we couldn't even get an inch of protection. All covered space from the storm were crowded full.

The wife and I decided to make a run for the entrance and head back to the hotel. As we passed the giant sorcerer's hat we saw a cart get flipped over by the wind and thrown a good 20 feet before it was stopped by some palms. By the time we carefully made it to the entrance, the storm was already subsiding, but we were soaked from head to toe so we still decided to head back to the hotel.

My flip phone was in the bottom of my backpack, which was now filled with about 3" of water on the inside, which I'm still not sure how the water got into it because it was closed tight.

All said, we went back to the resort, dried off, and then went right back out again as by then it was all clear and just as perfect as it began.

That's Florida weather for ya'.

We also stayed at CBR. I was disappointed that the information about park closings (earlier than expected for Thursday) and info about boxed lunches wasn't given to us until 12:00 on Thursday!!! We were already at Hollywood Studios by that time. So we missed the advice about needing to eat dinner at the park. We returned to our room about 5:30, to be hammered with VM's with instructions and info. We immediately headed down to Port Royale to purchase the ( very overpriced) boxed lunches, because PR had been emptied of every other morsel of non-perishable food and snacks. Then we learned the boxed lunches were sold out- only to return to PR at 8:00 (for the arcade) and learn boxed lunches were back. I stood in line for 2.5 hours for sandwiches!!!! There HAS to be a better way. Let people give an order to someone and tell us a time to come pick them up or something. Or better yet, deliver them to the rooms! Disney faced a major threat and challenge. But in my opinion, more preparation and more information EARLIER would have made me happy. Not one cast member acted like anything was amiss just the day before! Then Thursday comes and it's a mad scramble!!! Next time- we will just go home early.

We also were at the Caribbean during Matthew, although it seems we were at a different resort than the author. The only phone messages we got were to stay in our room, no message that things were opening up earlier than 5 p.m. we finally ventured over to Disney springs around 6 p.m and it was utter chaos. We left and ate our turkey sandwiches back in our room, how so many people got there so fast is amazing, we had a car and drove. We lost two table service meals because of this...a 3 hour wait for a restaurant is unacceptable. I feel Disney prepared their property, but missed the mark with their guests, especially those in the moderate priced resorts

I agree that we did not get all of the messages at CBR. We had originally been going to have to split hotels at Pop Century for 4 days and CBR for 2. With the mass exit from the resort that we had no idea about upon arrival on Wed. (We were on the way to our airport at 3am and were kind of out of touch with any news) we only had to stay at PC 1 night, thankfully. We had our luggage transferred to CBR and went right to Epcot. We did have a higher room with the move but it was worth it. We never saw our new room until after the parks closed. I would have liked to have been told at the park that the food service would be limited when we got back. And we were never informed about Disney Quest or even the arcade. It wasn't a big deal but we may have checked out Disney Quest. Oh well, it was still a great vacation.

I love Disney and wish I could have been there during the storm, Instead I was two hours northeast in St. Augustine as many of my friends lost everything they own to flooding. Be grateful that you were in the happiest place on earth.