Love them or hate them, MagicBands have become a huge part of the Walt Disney World experience. These small RFID-enabled devices debuted only a few years ago, but are now used for everything from gaining admission to the theme parks, to redeeming FastPass+ reservations, unlocking hotel doors, linking PhotoPass photos to a My Disney Experience account, and even paying for food and merchandise.

The bands are used for so much that its hard to even imagine a Walt Disney World vacation without them. However, the MagicBand as we currently know it may be disappearing from Disney parks forever in the very near future.

Though Disney has changed the design of MagicBands a few times before in the past and has introduced some fun and interesting limited edition designs over the years, it looks like a radical change for this Walt Disney World mainstay could be coming soon. This may have been hinted at a few months ago by Disney CEO Bob Iger, who said that Disney is looking at ways to evolve both the MagicBand concept as well as the corresponding MyMagic+ technology. Though nothing has formally been announced yet, a recent FCC filing may have spilled the beans on what Disney is planning for the future of MagicBand technology (and in a big twist, the next MagicBand may not be a band at all...)

1. The next MagicBand could have a “puck” style construction 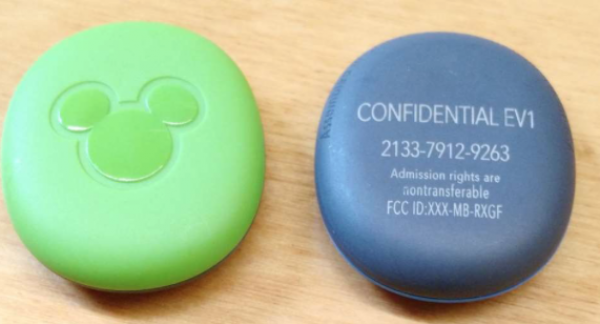 MagicBand authority MagicBand Collectors recently published an exclusive report yesterday that reveals that a new style of MagicBand which features a “puck” construction (similar to a wearable pedometer step tracker) is officially in development. While we don’t know if this new style of MagicBand is being designed for use at Walt Disney World, Disneyland Resort, or even as part of the foot-tracking technology that was recently revealed (we could see this device being clipped on a shoe), MagicBand Collectors states that this new device has actually been in development for some time and has even been tested in the past few weeks, which means that Disney is actually looking at developing and releasing this technology (instead of just patenting it and forgetting about it)

2. It looks like interchangeable straps will be offered as an option 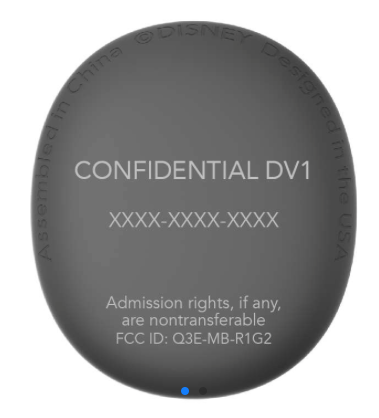 According to the original filing with the FCC, this prototype puck-style MagicBand will be designed to fit into a changeable strap as well. Not only would this allow MagicBands to keep the "band" element of their name, but it will also allow guests to change their strap as often as they want, while keeping the central part of their device the same. In addition, guests won't have to worry about linking multiple bands to their My Disney Experience accounts, as there will be only one core component that can be used over and over again.

Interestingly, because guests will be changing straps not full bands, this next generation device should also allow guests to keep this next generation MagicBand device over multiple trips. While that might not sound like a big deal, a common criticism of the current MagicBand technology is that guests who make frequent trips to Walt Disney World end up with drawers and drawers full of MagicBands since they automatically get new ones every time they go. With this new technology, that might not be a problem any more.

Can't imagine they'll really be intended for shoe use since they just put in the whole new turnstiles for wrist scanning.

Like: That it is still wearable. The last thing I want to see if the Magic band technology is something that you have to carry around, as that would require finding somewhere to put it while you are walking around and having to remember to retrieve it after you get off rides where you have to stowaway loose articles.

Dislike: The puck like size appears to be a lot wider and possibly bulkier than the current bands, which are fairly thin, at lest compared to this new design.