5 Secretive Things We Aren't Being Told About Rivers of Light

Several weeks ago, Disney confirmed that the Rivers of Light nighttime spectacular will be debuting at Disney’s Animal Kingdom on Earth Day, April 22nd, as previously rumored. In the days since that announcement we’ve gotten an up close look at the costumes as well as some of the floats that will be used during this nightly spectacular.

However, though we have plenty of information about the actual Rivers of Light show itself, Disney is holding back some key details that should have been released by now. With less than three weeks to go before this show's big debut, here's what we're still wondering...

1. How late is Disney’s Animal Kingdom going to stay open?

If you navigate to Walt Disney World’s official park calendar right now and select April 22nd (the opening day for Rivers of Light), you’ll notice something very curious: Disney’s Animal Kingdom is still set to close at 6:30 PM. This seems a little odd considering Rivers of Light is supposed to be a nighttime show, and the sunset doesn’t even occur on this date until 7:56PM in central Florida.

While we fully expect Disney to change their hours between now and April 22nd, it seems ludicrous that with less than three weeks before this major new show is set to debut, we don’t even know how late the park is going to be open on its first day of evening operations. Which brings us to our next query…

2. How many showings of Rivers of Light will there be per night?

Several weeks ago a technical glitch with the My Disney Experience app allowed guests to see available reservations for a Rivers of Light dining package that was not formally announced yet (and actually still isn't confirmed as of this writing). However, according to this leaked information, Rivers of Light was to have three performances per evening, which led us to speculate that this show was either really short, or Disney’s Animal Kingdom was going to stay open really, really late.

In the weeks since this glitch was first revealed, we've heard nothing about how many shows per night guests can actually expect.  Three seems like a very high number (even Fantasmic over at Disney's Hollywood Studios is only performed twice per night during the busiest peak seasons) but the uncovered reservation text looked very official, and the corresponding dinner reservation times seemed to give this leak some credibility.

3. How is FastPass+ going to be handled? 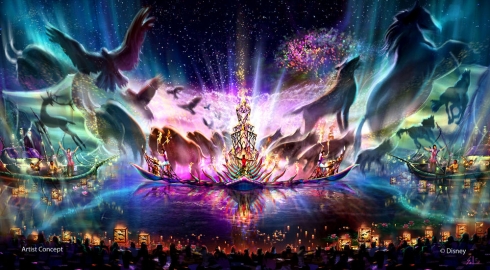 Right now, FastPass+ is used for all of Walt Disney World’s nighttime spectaculars (though it is ending at the Magic Kingdom soon for Wishes), so it seems like a no-brainer that Rivers of Light would have some kind of FastPass+-specific seating. However, with only a few days to go before this show is set to make its big debut, we can’t help but wonder exactly how Disney is going to handle FastPass+ reservations in the early days of this event. Will FastPass+ reservations just appear one day? Will Disney announce when they will be available ahead of time? Guests will likely be clearing out their FastPass+ iteneraries to make sure they are able to see this show as soon as possible, and though we are closing in on the final days before this show opens, it would be great to at least know when FastPass+ reservations will be able to book for eager guests.

We visited Animal Kingdom in November and they stayed open till 8PM. I've heard that with the River of Lights Disney planed for this park to stay open until 9PM. Which would make sense being that EPCOT has the same hours. My thinking...this would allow for two shows...possibly 8pm and again at 9PM. The show is scheduled to open for the public on April 27th.

Here's what I know from someone who's been working on the opening team. The theater has been delayed being turned over from the construction crew by almost 3 weeks. They have been told it will be 3 shows a night and there are 2 theaters for the show. One on dinoland side and one on Asia side. The Asia side is going to be a fastpass only theater. Just what I've heard from someone who been working on the opening of this theater for 6 months

Up charge may be the key word for the closing time still being 6:30. Perhaps a hard ticket event? They seem to be the new money maker.