While it has been rumored since the end of last year, Disney has finally made it official: Disney’s Hollywood Studios is getting a new Muppets-themed land. Named Muppets Courtyard, this new land will encompass the only remaining vestiges of the original Streets of America Land, including the MuppetVision 3D attraction, as well as Mama Melrose’s and the currently under refurbishment Pizza Planet.

While the name change on a map might not mean much in the short term (the area isn’t expected to change at all when the Muppets Courtyard quietly makes its official "debut" on park maps next week), there are some potentially exciting developments that could happen in this area in the coming months as this accidental land fleshes out. But let's get the obvious out of the way first...

1.It really is the end of the road for the Streets of America 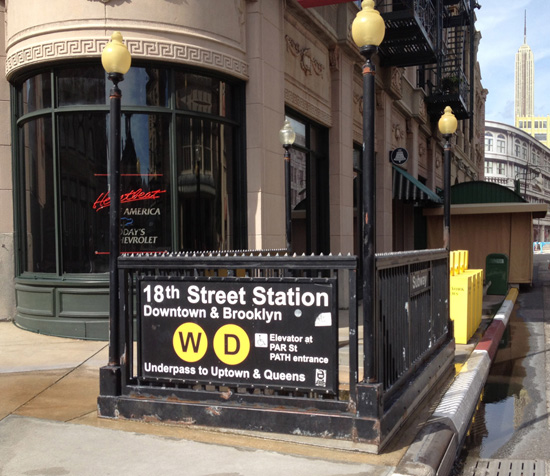 Surprising no one, it looks like when the majority of the Streets of America closes on April 2nd 2016, it will be the official end of this land after over 25 years in existence. While the MuppetVision 3D attraction as well as Pizza Planet and Mama Melrose's are all technically a part of the Streets of America currently, it looks like Disney is ready to move on and finally leave the legacy of this land (which never quite found a purpose after the backlot tour was downsized) behind, which is probably for the best, since a Muppets attraction and two restaurants don't really represent "America" all that well. Still, it is a little bit sad that this iconic land will be gone forever officially as of April 2nd. However, now that the Muppets Courtyard is taking over the remnants of this land, let's look to the future...

2. The future of Pizza Planet 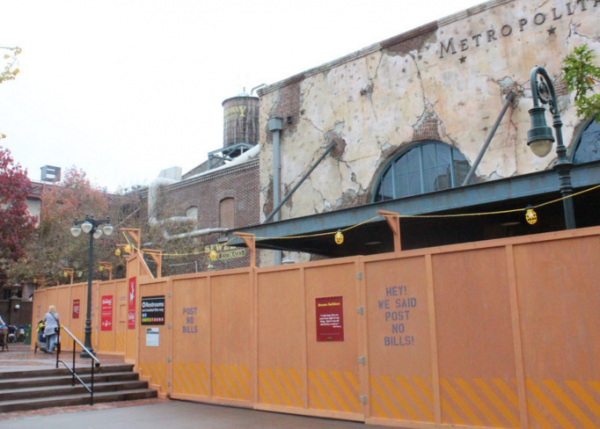 When walls first surrounded the Pizza Planet quick service restaurant earlier this year, we noted how the signage placed on the barriers conveyed a humorous tone, and seemed to be strangely elaborate for just a simple refurbishment. At the time we felt like this could be a little hint that a Muppets re-theme could be on the way for this eatery, as rumors at the time had suggested as much. While it might have seemed a little crazy at the time to over-analyze construction signs (and it probably was!) this latest development lends credence to the idea that this restaurant will re-open as something completely different (and more than likely Muppets-related) when its refurbishment ends later this year. 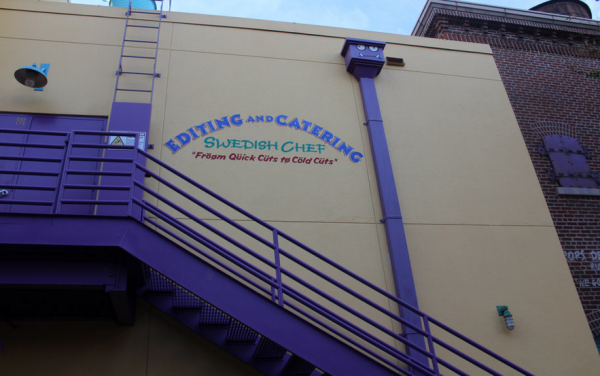 It's worth noting that in the original plans for Disney's Hollywood Studios, the space occupied by Pizza Planet was supposed to be a Swedish Chef Cooking School Restaurant (which is actually referenced right outside MuppetVision 3D in the blink-and-you'll-miss-it signage above).

While we don't know if Disney will go with this original concept for this restaurant, it does seem increasingly likely that a complete re-theme is going on, and when this quick service location re-opens it will have some kind of Muppets connection. Disney has yet to make any kind of statement about this, but with the Streets of America closing in a few days (and this refurbishment a few months away from completion) we wouldn't be surprised if something is announced very soon.

Oh my goodness this is exciting! I am a huge Muppets fan from Aus and I am going to WDW/Hollywood Studios in 2 weeks!! IM SO EXCITED ABOUT THIS ANNOUNCEMENT!
However, while I know that the refurbishment will take a while, can anyone tell me what is currently open that is "Muppet" themed? I need to know! Haha!
Thanks in advance! :)

Honestly, something I've always hoped for (that's unlikely considering the existence of 50's Prime Time and Hollywood & Vine is a Muppet themed diner, like the one in Muppets Take Manhattan or the newer one with Amy Adams has now become a dedicated landmark to the Muppets. But... peoples is peoples and the peoples at Disney will do what they do..

2 branded restaurants and 1 movie do not an immersive Muppets experience make. In my opinion, Disney needs to add at least one kiddie ride, and one or two more C-ticket rides to make it worth calling it a courtyard (specifically taking over Honey, I Shrunk The Kids and the Studio Catering Co.). The ironic thing is it wouldn't take much because the Muppets can get away with doing something cheesy and making it fun. For example, dust off the old Kitchen Kabaret (still in the warehouse somewhere, right?) and rebrand it as the Swedish Chef's Cooking Show (use the audio from the original muppet show). Now, how great would that be?!

Why can't they just license the other Jim Henson creation and make Sesame Street? Oscar the grouch on the corner, and all. They could buy the other park outright which could effectively gives Disney the oppertunity to achieve park rights to the characters park rights, and maybe expand Muppets to the sesame Street park.

Just a guess, but there is likely licensing issues that would prevent Disney from capitalizing on Sesame Street. Sea World's parent company operates the Sesame Place theme park in Langhorne, Pa.